In a series of highly-charged press conferences ahead of this weekend's Valencia GP, Rossi admitted he regretted taking Marquez wide in the clash at the centre of the furore, while Jorge Lorenzo apologised for making a 'thumbs down' gesture at Rossi on the Sepang podium.

Rossi had previously said his collision with Marquez was borne out of frustration at the aggression with which the Honda rider was battling with him, on a weekend that started with Rossi claiming Marquez had tried to hamper his title bid at Phillip Island a week earlier.

Asked if he had any regrets about Sepang, Marquez replied: "I just regret that I didn't finish the race for my team. In every race, I'm trying to do my best."

Marquez said he would abide by that, but stood by his post-race criticisms of Rossi.

"In Sepang, I already said it. My opinion is the same but I will not say it again because Carmelo and the FIM asked us only to speak about Valencia," he said.

Honda had planned a press conference at Valencia to show the data from Marquez's bike at Sepang, which it said proved a 'kick' from Rossi was the direct cause of the crash.

It called the briefing off because it did not want to be seen to be influencing the Court of Arbitration for Sport's verdict on Rossi's appeal.

"We cancelled the press conference to show the data because they didn't want to get inside the decision of the CAS and show any influence," said Marquez.

"In the end, the decision was already gone. I know what happened in Malaysia. I already said it. 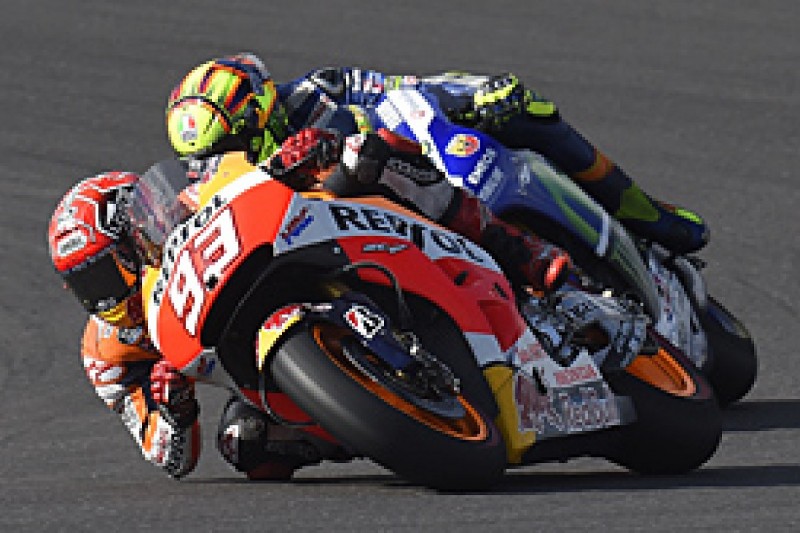 Marquez said he would approach Sunday's Valencia race exactly as he would any other.

He described the fortnight between Sepang and Valencia as "one of the most difficult" periods of his life.

"I tried to forget it, I tried to concentrate 100 per cent and prepare for the last race of the season but it was not possible to prepare in a normal way," said Marquez.

"It's a hard experience. It's not easy for a rider, especially at 22 years old."