Marc Marquez sealed his fourth MotoGP title with after finishing third in the season finale at Valencia won by Dani Pedrosa, as Andrea Dovizioso's championship hopes ended with a late crash

Dovizioso needed to win the race and hope polesitter Marquez couldn't finish inside the top 11, and the Italian made quick progress from ninth on the grid to settle into fifth behind Ducati team-mate Jorge Lorenzo.

Marquez led the opening laps, but looked over his shoulder as he allowed Tech 3 Yamaha's Johann Zarco ahead at Turn 6 on the fourth lap, and settled into a rhythm behind the Frenchman.

Zarco headed a five-strong lead group comprising himself, Marquez, Dani Pedrosa, Lorenzo and Dovizioso, who put increasing pressure on his team-mate in the fight for fourth.

Lorenzo however wouldn't move over for the Italian, and was eventually given the coded instruction 'Suggested Mapping 8' for the second race in a row after 13 laps.

The Spaniard still didn't heed the instruction and was eventually shown a pitboard with an arrow clearly telling him to drop one position after several more laps of running ahead of Dovizioso.

It wasn't until the 20th lap of a tense 30-lap encounter that the order changed, as Marquez briefly passed Zarco, only to be overtaken straight back.

Marquez was soon back on the attack, passing on lap 23, but he almost blew what looked to be a safe title as he misjudged his braking into Turn 1 on the following lap and ran wide into the gravel.

Keeping his works Honda upright, he managed to rejoin in fifth, behind Zarco, Pedrosa, Lorenzo and Dovizioso.

After Dovizioso started to drop back, Lorenzo then crashed out at Turn 4 with six laps remaining, before Ducati's hopes of a first title in a decade crumbled as Dovizioso fell at Turn 8 on the same tour.

That promoted Marquez to third, which was enough to beat Dovizioso to the title by 36 points.

Meanwhile, Zarco came under increasing threat from Pedrosa in the closing laps, and eventually succumbed to the works Honda rider at the start of the final lap. 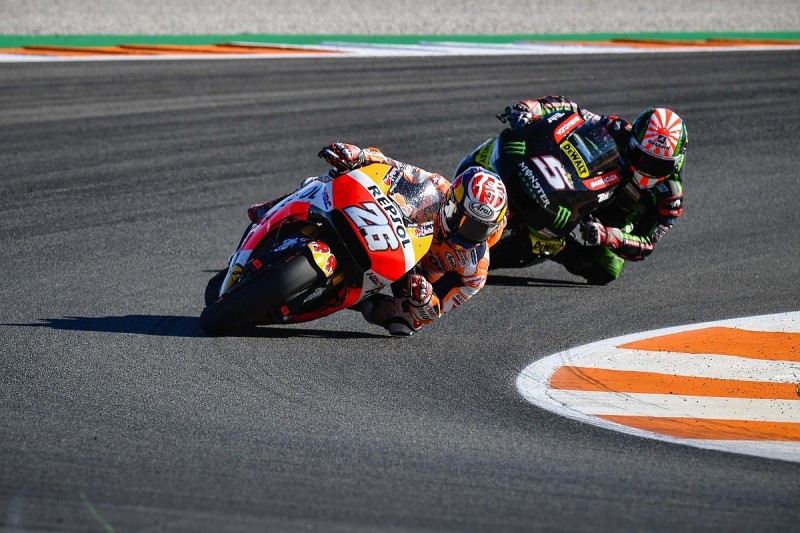 Behind Marquez, Alex Rins took a career-best fourth for Suzuki, and Valentino Rossi was fifth on the best of the works Yamahas.

Satellite Ducati riders Alvaro Bautista and Scott Redding both crashed out early on, along with Aleix Espargaro's Aprilia and the wildcard KTM of Mika Kallio.

Sam Lowes was also a late crasher in his final MotoGP outing for Aprilia, while pitlane starter Pol Espargaro was the eighth and final rider to fall.