Following a lacklustre to run to ninth at Motegi last weekend, Yamaha rider Vinales has fallen 41 points adrift of Marquez with only three races remaining and 75 points left to play for.

It leaves Vinales, whose last win came at Le Mans in May, in need of a big result in this weekend's Phillip Island race to remain in mathematical contention for the title.

But, even with Dovizioso now only 11 points behind following his thrilling Motegi win, Marquez says he is refusing to fully count Vinales out of the fight just yet.

Asked if the title fight is now a two-horse race between himself and Dovizioso, Marquez replied: "Dovi of course is the most dangerous one.

"But still half an eye is looking at Vinales because he is far [behind in the points] but not far enough.

"The approach for the race is much different to last year. We will try to compensate our level with the risk, because it's important to manage well.

"We will see after qualifying if we can fight for victory or if it's better to think about the championship." 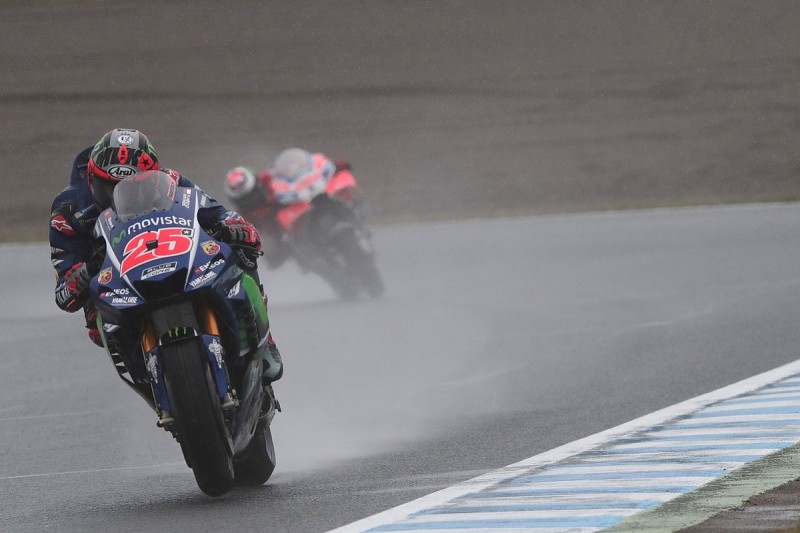 Asked about his own title aspirations, Vinales admitted that he would now have to rely on Marquez and Dovizioso hitting trouble in order to be able to close the gap.

"For sure, now it's not in our hands," said the 22-year-old. "Our opponents have to make mistakes, so it's going to be very difficult.

"Now I'm just trying to enjoy, to bring the Yamaha to the maximum level and try to repeat the win.

"For sure Motegi was a difficult race. We have to forget, no pressure now, and continue riding like we were riding before."

Vinales, who has not even led a race since Mugello in June, added that the Phillip Island event should provide an opportunity to assess how the M1 has evolved since the winter.

"In the pre-season I felt really strong, all the laps I did here at Phillip Island were good, 1m29s and 1m28s, it means we were at a good level," he recalled. "We see this weekend if we reach this level or not.

"Honestly it's been difficult during the races to be at the front. At Silverstone we found a way to be strong, especially at the end, but finally we attacked too late to win the race.

"We'll try to be at the level we were before and give the maximum as always."

Marquez has edge over Dovizioso in MotoGP title fight - Crutchlow