With his fourth victory of the season at Aragon, the Honda rider moved to 52 points clear of Valentino Rossi and 66 ahead of Jorge Lorenzo in the standings.

A maximum of 100 points is available across the remaining four grands prix, and there is an outside chance Marquez can win the championship in Japan in three weeks' time.

For that to happen, Marquez would have to win and Rossi finish 14th or lower, and Lorenzo finish off the podium.

When asked about the prospect of winning the title at the first opportunity, Marquez said: "No, in Japan I will not win the championship.

"I would like to because it's Honda's home circuit, but I don't think so.

"We must wait, we need to be patient. We cannot make any mistakes.

"It's not important where, it's important to win. We must keep the same mentality.

"We know that Japan will be one circuit where maybe we are struggling more, but we will arrive on other tracks that will be better for us."

Marquez said before the Aragon weekend that he would be content to not win another race all year if he still won his third MotoGP title in four seasons. 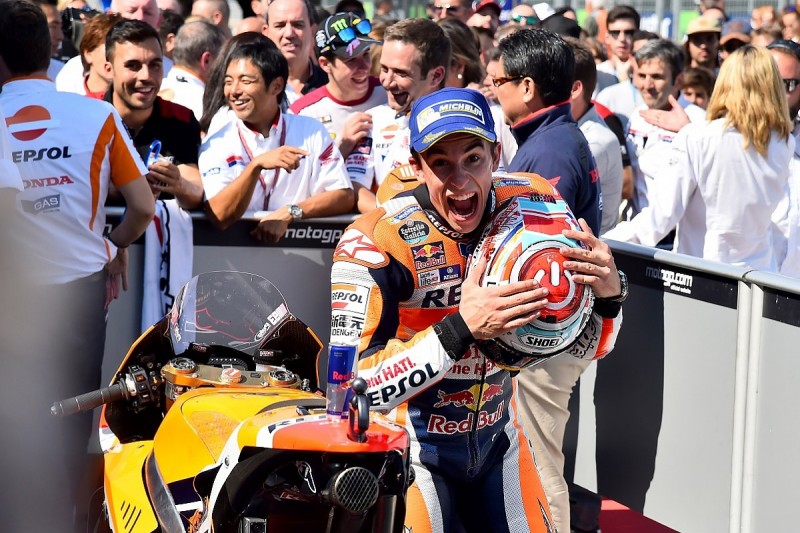 But after securing his first victory on home soil since the 2014 season finale at Valencia, Marquez said the win was "important", as was beating Rossi for the first time in five races.

"Since Germany - or since Austin in a dry race - we could not win again," he added.

"Valentino was catching me step by step and that was important to stop.

"If not, his mentality is going up up up, and we would start to have some doubts.

"But here I felt good again on the bike. I was waiting for this race, on the calendar there was a red point here to attack for a win, and everything went to plan."

With Dani Pedrosa at Motegi and Sepang and Marquez at Phillip Island, Honda won all three late-season flyaway races last year, and Marquez said the middle leg of the triple-header was one of those "red points" on the calendar.

"Phillip Island, Valencia, are good circuits for me," he said.

"But also Motegi I was strong in dry conditions and then in the wet it was different.

"Malaysia with the new surface we will see how we can manage.

"If we arrive and we cannot win at a circuit where we have a red point, it's not a problem, we must wait."