In cool but sunny conditions, the lap times on the Le Mans Bugatti circuit tumbled in the final part of the 45-minute session with the top spot changing hands several times.

Yamaha's Maverick Vinales looked to be in a strong position to top a race weekend session for the first time since last year's Aragon race when he moved ahead with nine minutes to go, knocking the Suzuki of Andrea Iannone off the top spot.

A succession of improvements by Vinales, culminating in a 1m42.543s, gave him a cushion of nearly half a second over his pursuers.

With just two minutes remaining, Marquez moved up to second on the works Honda, 0.051s behind Vinales, before Ducati rider Dovizioso posted a 1m32.501s to go fastest with less than a minute left.

But after the chequered flag came out, Marquez managed to put in a time 0.025s faster to end the morning on top ahead, with Vinales having to settle for third, 0.067s down. 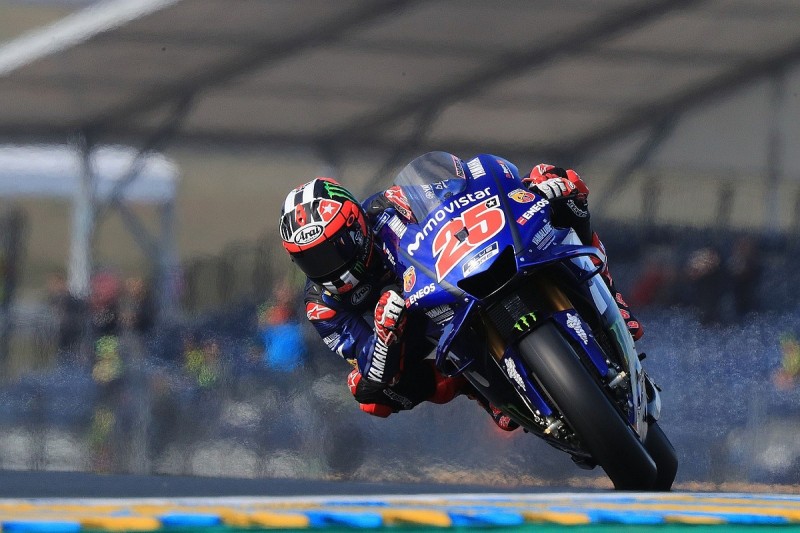 Marquez used the new Honda fairing first tried at Jerez during the session.

Best of the rest was LCR Honda man Cal Crutchlow, 0.258s off the pace of stablemate Marquez and 0.021s ahead of fellow privateer Johann Zarco (Tech3 Yamaha) in fifth.

Valentino Rossi enjoyed several spells at the head of the times early on, but slumped to sixth in the final part of the session aboard the second works Yamahas, 0.301s off the pace.

Iannone was seventh, followed by Jorge Lorenzo (Ducati) and the two KTMs of Bradley Smith and Pol Espargaro, which completed the top 10.

Pramac Ducati rider Jack Miller crashed at the Dunlop chicane on his way to 12th, one place behind team-mate Danilo Petrucci, while Aleix Espargaro was Aprilia's lead runner in 14th.

The only other crasher besides Miller was Thomas Luthi (Marc VDS Honda), who went down at the same corner in the final minutes and was classified last.