KTM's MotoGP bike is no longer "kicking like crazy" with the switch to its reconfigured engine, Pol Espargaro says

Having started the year with the only 'screamer' profile on the grid, after Honda's winter switch, KTM followed suit in moving to the 'big bang' firing order with the specification introduced at Jerez.

Espargaro and team-mate Bradley Smith tested the new unit at Le Mans days beforehand, and an initial evaluation in first practice turned into running it for the entire weekend.

The Spaniard said improved acceleration has been the main difference with the new engine.

"We were complaining about the acceleration, especially in first two gears," he said.

"Now the bike has good traction because the engine allows the tyres to do that and the power curve again is normal.

"It's not kicking like crazy, everything feels good and the result is that we can follow [other riders] on the acceleration."

While Espargaro crashed out of the Jerez race, Smith scored points for the second time this year with 14th place.

He said being followed by winner Dani Pedrosa during the post-race test offered further insight into the bike's strengths and weaknesses.

"We're not lacking in power in my opinion," Smith said.

"We are making good progress from than point of view. We have good acceleration and we have a bike with good rear grip.

"I think I had Dani behind me and even when they're behind you, you can work out what their strong points are because you can hear it in the tone of the engine, them closing on you or getting further away.

"That even happens when the race winner is following you for two or three laps.

"So yeah that's all positive." 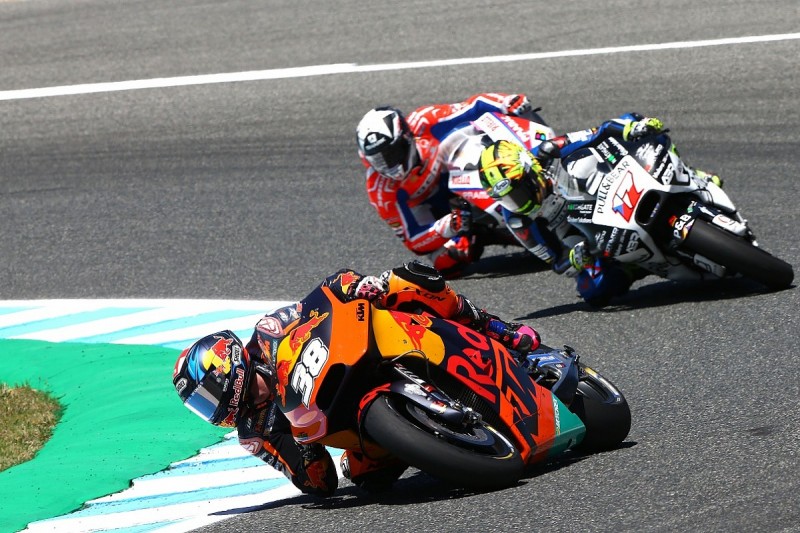 SIMILAR CHASSIS STEP WOULD BE 'AMAZING'

KTM recorded the best qualifying result of its fledgling programme at Jerez, with Espargaro 15th and Smith 16th.

Encouraged by the engine gains, Espargaro is now looking forward to another step with a new chassis KTM is working on.

"For sure we are missing something on turning," he said. "It's our biggest issue.

"If we do the same step with the with the chassis package coming soon [as the engine] it's going to be amazing."