The aggressive power delivery of the 2015 Honda engine was cited as a key factor in Marquez's error-strewn first half of this year's championship.

Honda is conducting a three-day test at Spanish Grand Prix venue Jerez this week alongside Aprilia and Ducati, focusing on next year's control electronics - about which the riders have already expressed misgivings - and engine comparisons.

"Today I concentrated on the Magneti Marelli software and mainly the new engine," said Marquez.

"It's clear that we need a different mapping for the 2015 and 2016 engine - as they are completely different character - so we chose to work more on the 2016 version.

"Last year's engine was more aggressive in the top end and now we have more power in the lower rpm but still it's not clear the best way to deliver the torque, we must find the best balance."

Pedrosa agreed that the very different engine characteristics were raising some question marks.

"We don't have a clear direction yet, we are working hard and don't want to make a mistake," he said.

"There are still positives and negatives concerning the new engine so we must take our time as we must make the correct choice for next year."

While Marquez focused solely on the 2016 engine on Wednesday, Pedrosa carried out comparison runs between the two specifications.

Marquez said the time needed to make changes was a worry, and is also still uncomfortable with the new Michelin tyres' behaviour.

"It takes a lot of time working on the new electronics to change things and this extends our time in the box, but we are still far from getting the best out of this software," he said.

"We didn't do too much on tyres today and the front tyre is still difficult to understand but we know Michelin are working hard."

Pedrosa feels Honda has at least made some headway with the electronics since the last test at Valencia.

"Compared to Valencia we have certainly made a step with the new electronics and it's a little better," he said.

"We struggled everywhere in Valencia but here it's all a lot smoother but still we have to get more experience with it."

Honda reported Marquez's best time as a 1m39.57s, six tenths of a second up Pedrosa but 1.6s away from the 2015 pole time at the track and eight tenths off the race's fastest lap.

"The lap times aren't that good in general but they are similar to yesterday, so not clear if it's the track or tyres," said Pedrosa. 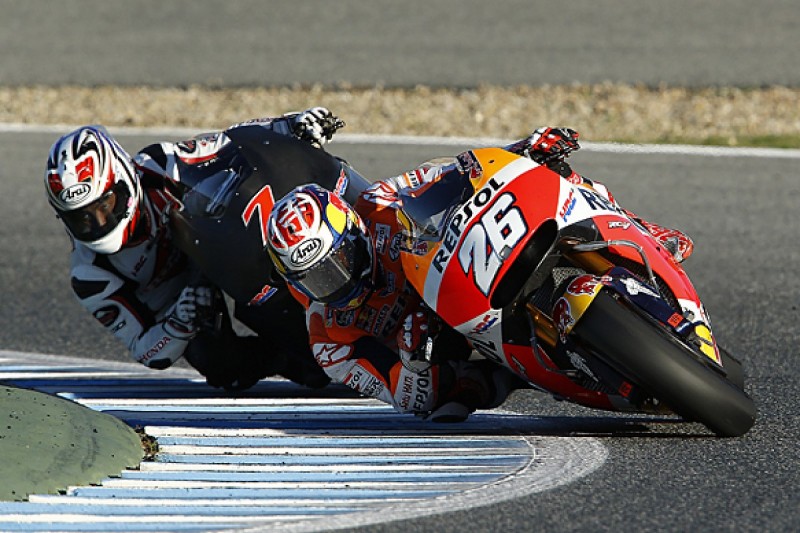