Marc Marquez says the longer Friday practice for the MotoGP Japanese Grand Prix allowed him to go “full attack”, but admits doing so in the race will be “difficult”.

Due to the logistical difficulties in getting the entire paddock from Aragon to Japan in just a few days, Friday’s practice schedule was altered to feature just one session of 75 minutes duration.

Marquez was unable to complete race distance on his Aragon comeback due to two collisions on the opening lap.

Anticipating the stop-and-go nature of Motegi to really put his recovering right arm under strain, Marquez says he now expects he will have to drop his pace in Sunday’s grand prix to get to the finish after going “full attack” in the extended practice on Friday.

“I feel quite good,” said Marquez, after finishing FP1 sixth fastest and just 0.147 seconds off Ducati’s Jack Miller at the top of the standings.

“Today the fact it was only one practice at one hour and 15 minutes, and tomorrow it looks like it will rain, I started full attack.

“Not like crazy, just I didn’t think about my physical condition.

“I just gave everything that I had and I felt it, because in the last part of the practice I started to feel some pain in some specific points.

“But we already imagined and already understood before coming here that it would be a very difficult circuit.

“And today I understood that to make a race full attack and consistent will be very difficult. So maybe for the race distance I will have to drop the pace a little bit to finish in a good way.” 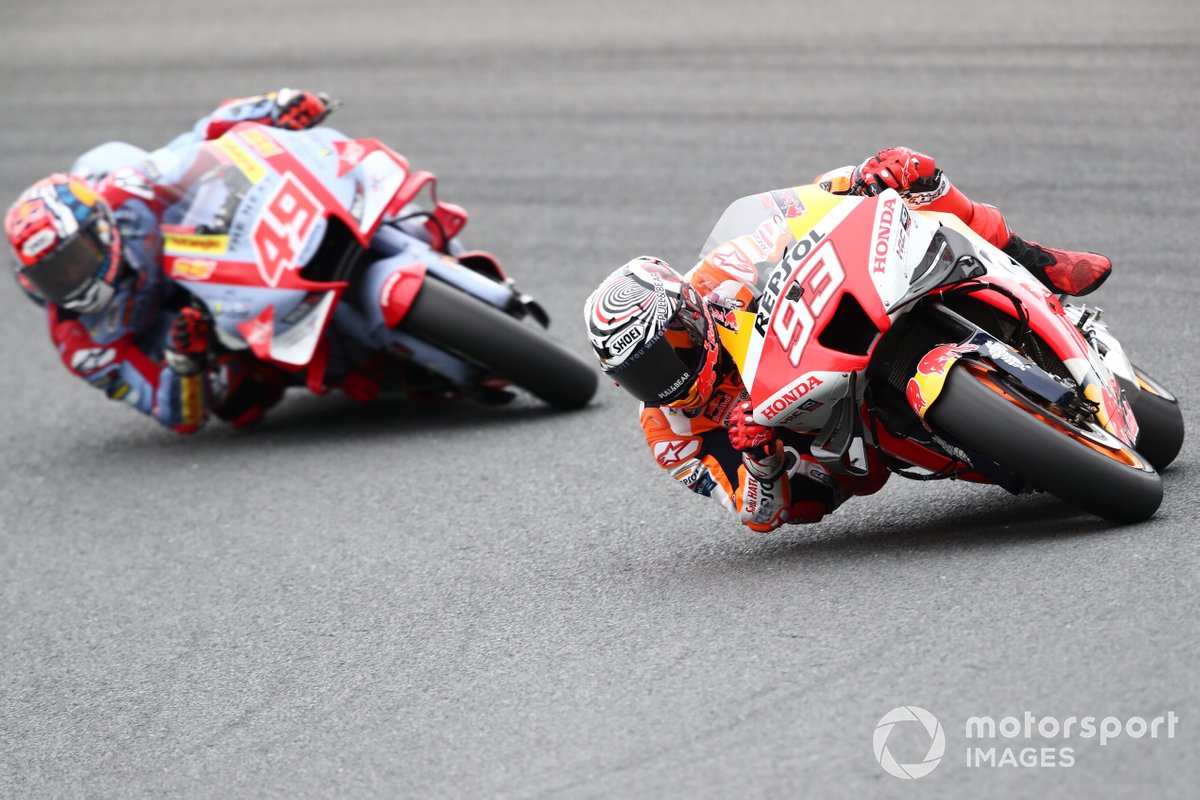 Both factory Honda riders were quick in Friday practice, with Marquez shadowed by team-mate Pol Espargaro in seventh.

The latter was left baffled by how quick he was on his soft tyre time attack, given how much of a struggle it has been this year for Honda riders.

But Marquez feels the nature of the track and the added grip on offer because of the longer practice session makes this upturn in qualifying pace easy to explain.

“It’s easy, it’s like always. In the practice, in Misano test, in Mandalika, in Sepang, with full rubber on track, good grip, you can use banking, then the lap time is coming,” he said when asked about Espargaro’s comments.

“Today the practice was one hour and 15. It means there was half an hour more of rubber on track.

“In the end, the grip was so high. So, as soon as we have high grip the lap time is coming.

“And especially Pol is struggling a lot with the lack of grip, like in Aragon.

“The problem with this bike the lap time depends everything on the rear grip because you cannot do anything with the front.

“So, the explanation is this: it’s a longer practice, more rubber in the end, and especially in this race track we don’t use the turning. You don’t carry the speed in the corners, and that’s our weak point this year.”