First ever VR46 MotoGP bike livery revealed for Marini in 2021

The first ever VR46 team livery on a MotoGP bike, which Valentino Rossi protege Luca Marini will race with in 2021 aboard the Esponsorama Racing Ducati, has been revealed

As part of Marini's deal, close ties have been forged between the VR46 team - for whom Marini raced with in Moto2 - and Esponsorama Racing, with the Sky-backed VR46 livery appearing on the Italian's bike.

VR46 Moto2 team boss Pablo Nieto will also have a senior role within the Esponsorama team, while some of Marini's crew from Moto2 will step up with him.

Revealed on Italy's version of the talent show X Factor on Thursday evening, the liveries for Marini's MotoGP bike as well as the squad's Moto2 effort - which remain almost identical to what was raced in Moto2 and Moto3 in 2020 - were unveiled.

The Esponsorama squad is unlikely to remain in MotoGP beyond the 2021 season, with rumours emerging in the latter stages of the current campaign that VR46 could take over the grid slots as early as next year. 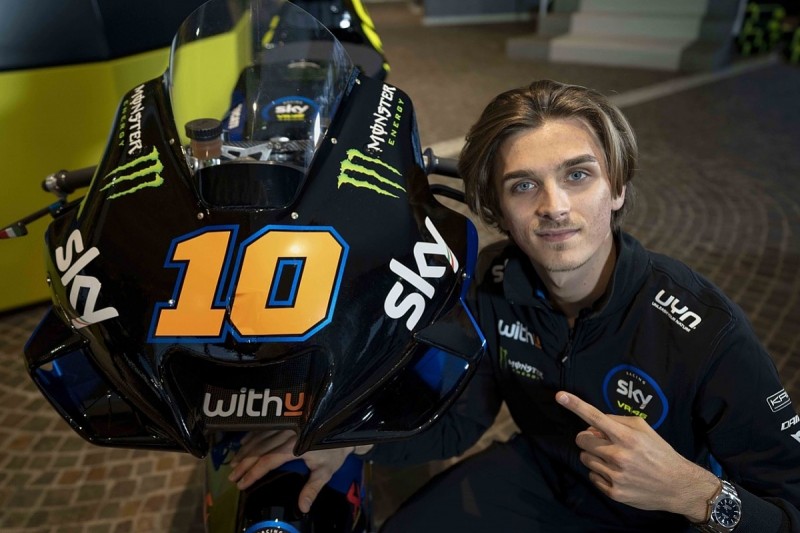 Team owner Raul Romero put those rumours on ice, but Esponsorama's link-up with VR46 points towards MotoGP legend Rossi's team stepping up properly in 2022 in the slots vacated by Esponsorama.

MotoGP's current agreement with the independent teams comes to an end at the conclusion of the 2021 campaign, making a move for Rossi's team full-time into the premier class much easier as it wouldn't have to buy out a team's slot.

With Marini stepping up to the premier class, it means Rossi will be racing with three of his Academy riders alongside Ducati's Francesco Bagnaia and his Petronas SRT team-mate Franco Morbidelli.

With VR46's first steps into the premier class, the team's Moto3 outfit has been shelved for 2021, with Celestino Vietti stepping up to Moto2 alongside Marco Bezzecchi.

Bezzecchi was offered a deal to join Aprilia in MotoGP for 2021, but VR46 didn't green light the move and he will remain with the squad in the intermediate category.