Pol Espargaro says his maiden MotoGP podium with Honda at the Emilia Romagna Grand Prix was “pain relief” having struggled across 2021 after his “huge risk” move to HRC.

Espargaro’s KTM exit and signing to the factory Honda squad for 2021 was one of the biggest rider market shocks of the 2020 campaign, especially when KTM emerged as a race winner last season.

Affected by limited testing this year due to the COVID pandemic, Espargaro has largely struggled to adapt to the RC213V – his best result a fifth at Silverstone having claimed pole that weekend when weather and track conditions perfectly suited the difficult 2021 Honda, which has been badly affected by a lack of rear grip.

Having qualified fourth at Misano last Sunday, Espargaro went on to complete a Honda 1-2 behind team-mate Marc Marquez to secure his best-ever finish in MotoGP.

Commenting on his maiden Honda podium, Espargaro said: “It means a lot to break this wall of the podium here in Repsol Honda, it’s pain relief.

“I took a huge risk in my career last year [leaving KTM] and honestly everyone saw I was struggling a lot during the year.

“But, finally to get this result is super nice for me. For the ego, it’s good for me as a rider, but it’s important for the team who’ve been working huge.” 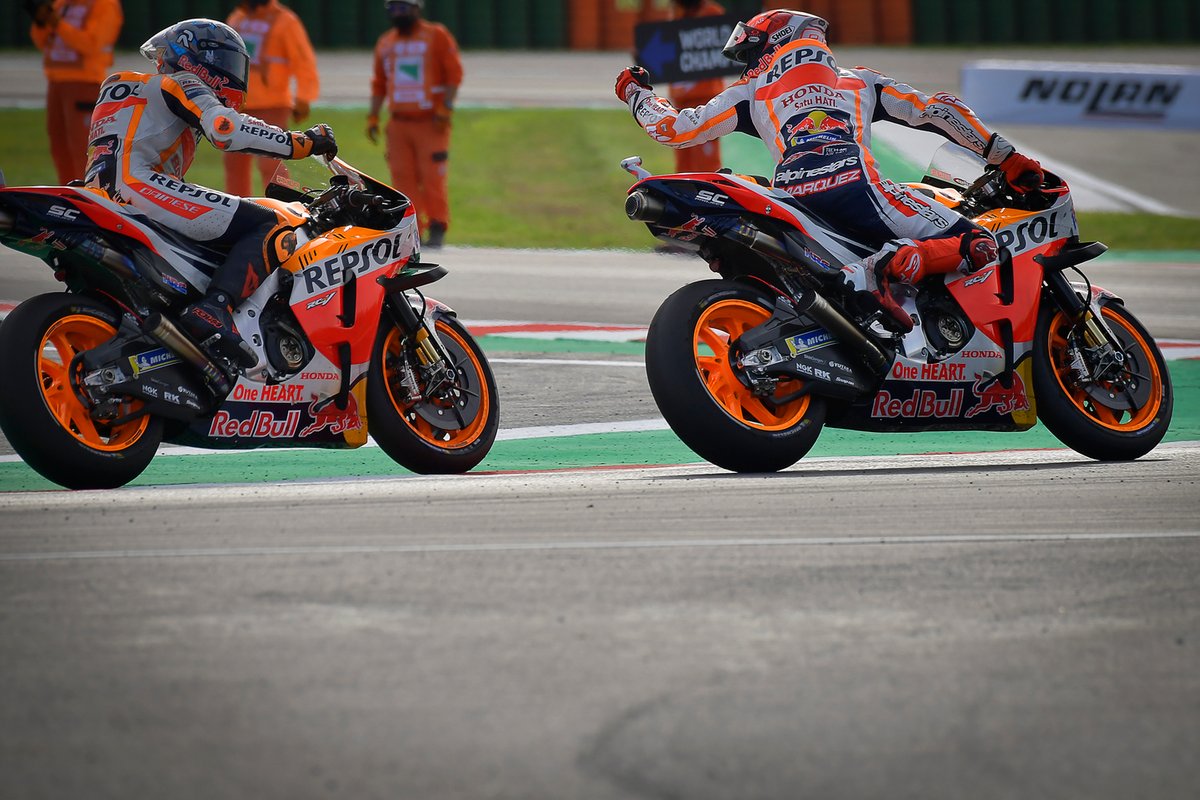 Espargaro reiterated the fact that his podium was far more important to the team than it was in proving anything to himself and to his doubters, noting the vast differences in how Japanese and European manufacturers worked last year during the height of the pandemic.

“Well, the importance of this podium, first of all the most important is for Honda to have the two bikes first and second,” Espargaro added after helping Honda to its first 1-2 since Aragon 2017.

“This is unbelievable after some tough seasons, last year was also a tough season for Repsol Honda.

“This is, talking about ego, super-important to me as a rider. I think it’s my best position ever in MotoGP, always I was in third position at KTM.

“So, it’s an important moment for my career for sure, but I feel more relief for Honda.

“You guys have not seen these guys working huge in the past, I said already in the COVID times I’ve been in a European manufacturer, I know how they were working during the COVID and it was flat out even if the COVID was hitting strong in Europe.

“But as you know, the Japanese took safety super-seriously, more seriously than Europeans and for sure in this COVID era they were struggling more than the European manufacturers.

“We have seen the European manufacturers doing huge steps in these COVID times while the Japanese were struggling a little bit more.

“So, for sure it’s important for me, but I just saw Takeo’s [Yokoyama, technical manager] face, [ [HRC director Tetsuhiro] Kuwata-san’s face today and it was more than amazing. It’s crazy how happy they are.”