Jorge Lorenzo says Ducati's two wins during the 2016 MotoGP season is a good sign, ahead of his move to the Italian manufacturer from Yamaha

The Valencia season finale will be Lorenzo's last race with Yamaha, having made his debut as a rookie in 2008.

That relationship has netted three world championships, but when Lorenzo signed with Ducati early in the current campaign, the team had not won a MotoGP race in five-and-a-half years.

"Obviously the bike is progressing every year," Lorenzo said.

"It's easy to see the bike being competitive more times on more tracks than it was in the past.

"That's a good sign, but [the Sepang] victory doesn't surprise me, because Andrea has always been one of the best rain riders and the Ducati, even when it was not competitive in the dry, it was in the wet.

"It's a good sign to see every time more Ducatis in the front in most of the tracks."

Lorenzo will ride with Ducati in the post-Valencia Grand Prix test, but miss another at Jerez a week later, based on his Yamaha contract running until December 31.

Dovizioso believes Ducati is "very close" to having a Desmosedici ready to challenge for wins on a regular basis.

"Our bike has become better in the last two years, we are able to take a lot of podiums," he said.

"For sure we still don't have the best bike, we don't have the bike to try to fight for the victory every race, like this year and last year Yamaha and Honda - but we are very close." 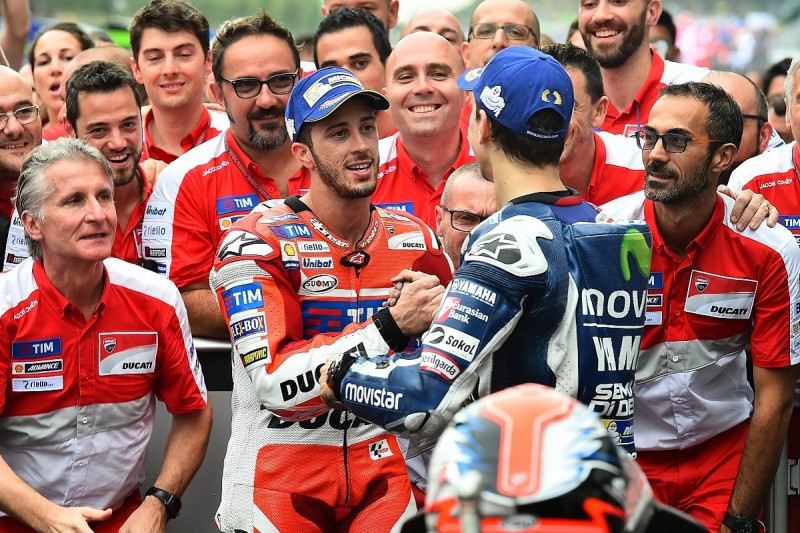 All eyes will be on Jorge Lorenzo when he leaves the Ducati garage at Valencia for the first time on November 15.

How Lorenzo's move from Yamaha to Ducati goes will be one of the biggest themes - if not the biggest - in MotoGP next year, and it looks like he is joining the brand at the right time.

But of Ducati's two wins this season, one was on the circuit that best resembles a drag strip, and the other was in the wet, conditions that help Ducatis, even ones not ridden by noted rain-master Andrea Dovizioso.

Ducati has been plagued by tyre issues this year, from killing rears in hot conditions to chunks falling out of fronts in the rain, and then the disaster that was the Aragon race.

If Ducati can get on top of those issues, and adapt to life after its coveted winglets, Lorenzo could find himself loving life in red.

There are no guarantees either way, but it's going to be fun watching to find out.