A combination of persistent rain on Sunday and Silverstone's new track surface failing to properly drain water caused the British Grand Prix to be cancelled, after hours of delays due to unsafe track conditions.

It was only once the vast majority of riders had agreed not to ride that the race was formally abandoned at around 1600 local time, four and a half hours after the race was originally scheduled.

But, not every rider was present in the meeting, in part because there was no official call.

Dani Pedrosa and Aleix Espargaro were the ones who convened the meeting at the offices of teams' association IRTA, contacting riders individually to join them.

Ducati rider Andrea Dovizioso is said to have been angry he was not informed in time, while team manager Davide Tardozzi (pictured) said he only realised the meeting was happening when he saw people gathering around IRTA's offices on TV.

"I did not receive any official notification of a meeting between the riders and the Race Direction to make a decision about the cancellation of the grand prix," Tardozzi said. 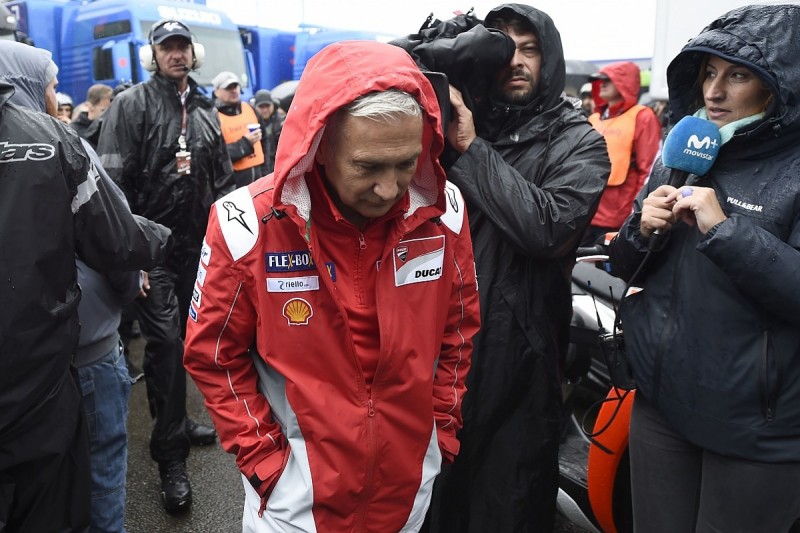 "The initiative of the meeting with the Race Direction came about spontaneously between a number of riders who started to inform the others to come to the IRTA offices.

"For example, Jorge Lorenzo had been informed by his manager Albert Valera, who had heard from Aleix Espargaro.

"Not all the riders were present because some of them had not been informed and others only showed up after seeing the images on television, but no one had officially called them.

"That's exactly what I did, I saw the images on television and I went on my own to find out what was going on.

"As always, no team manager entered the meeting, just as we are not present at the Safety Commission officially organised on Friday in the circuits.

"After excluding the possibility of racing on Monday with a vote between the teams (we voted in favour of this possibility), Ducati was totally in agreement with the decision taken because it was the safest thing for everyone, but I still believe that a decision of this importance should be made with all the riders on the grid through an official meeting."

Ducati was the only team in favour of holding the race on Monday, a public holiday in the UK, when the possibility was discussed in a mid-morning meeting.