Andrea Dovizioso admits he "didn't prepare" for a last-corner lunge on Marc Marquez to win the MotoGP Austrian Grand Prix, as Spielberg's final corner doesn't suit him or the Ducati

Dovizioso engaged in a race-long battle with championship leader Marquez at the Red Bull Ring, which culminated in a repeat of the pair's last-corner duel from the 2017 edition - though with Marquez on the receiving end this time.

The Ducati rider says Marquez's push late on to break away proved crucial as he wore away his medium rear tyre, which allowed Dovizioso to stick with him on his softer tyre and be in a position to "make that crazy last corner" pass.

"I really didn't prepare that corner [for a move], it's not really a corner for my style, for my bike to enter [well] there," he said.

"I started very aggressive, but Marc was more aggressive than me. But he lost the front on the exit [of Turn 3] and I came back again at Turn 4, and that was very important.

"When Marc overtook me he tried to push, make a gap, but his rear tyre dropped too much, and in the end I had a chance to fight to the last corner because he didn't have the same grip as me on the right [of the tyre].

"On the braking he was better, but with that grip I was able to stay with him and make that crazy last corner [move]. 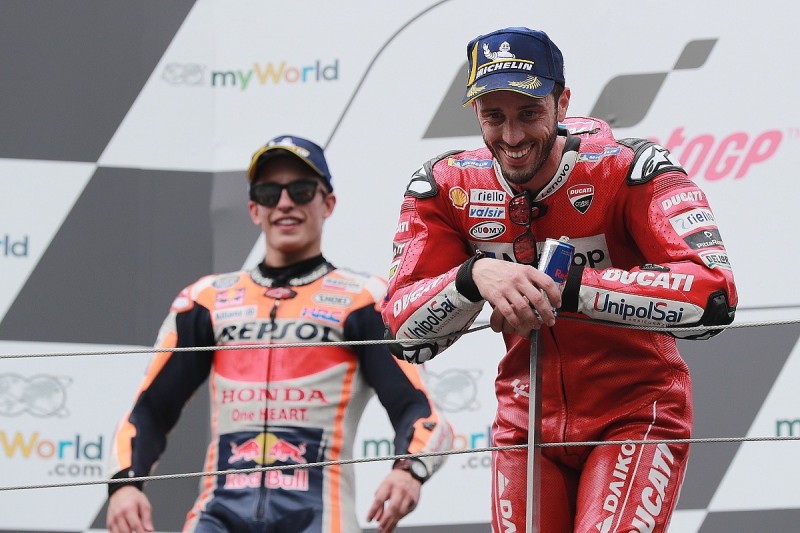 "I really didn't prepare for that, but I did the corner before perfectly and I was a bit inside and I thought 'OK, if I'm going long, I will be second no problem'.

Dovizioso says he was "scared" about the possibility of a last-corner duel, and admits he "didn't have a good feeling" to simply wait behind Marquez because the Honda rider was slightly faster.

"I was a bit scared about that, and during the race I didn't have a good feeling to wait [behind]," Dovizioso added.

"When you are pushing 100 percent, it's a bit harder. So, I had to be really careful on braking, you can make a mistake easy.

"But we worked in the right way during the practice.

"That gave us the possibility to be consistent to the end, because I wasn't faster than Marc, but in the end I had more grip to stay with him."