Water seeping through the track surface and taking significant time to dry was one of the issues that blighted a Michelin MotoGP tyre test at the freshly-upgraded circuit in July, but changes including drainage cuts were added before the venue's Formula 1 grand prix.

After rain on Thursday evening, damp patches remained on the racing line during first practice, while the second was affected by more rain between sessions, with wet weather also forecast on Saturday and Sunday.

"This morning we were able to ride in the full dry, but there were some wet patches that were very difficult and you have to stay very concentrated and careful because it's quite dangerous," Yamaha's Rossi, fifth for the day, said.

"We hope for the next days we have some clear conditions, full dry or full wet.

"The first feeling is not so bad, but for sure after today's rain the track needed too much time to dry out."

Suzuki's Maverick Vinales surmised that "the previous surface dried very quickly, while this one looks like requiring longer". 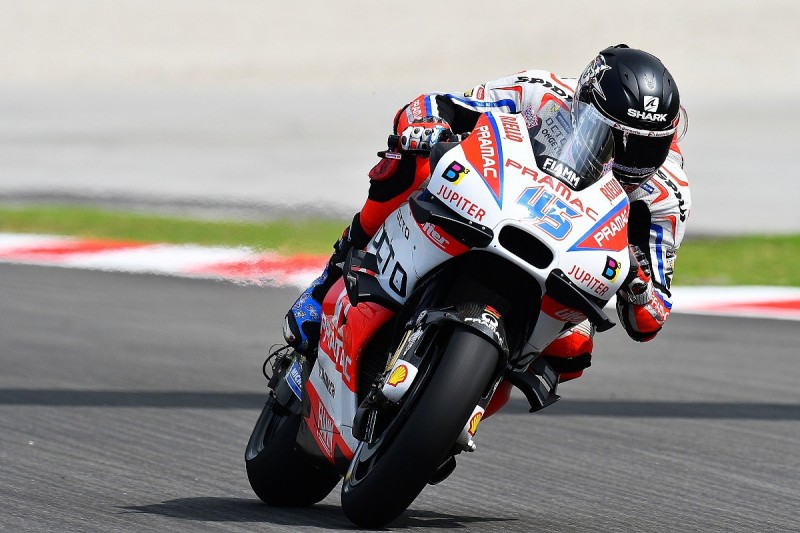 Scott Redding set the third-fastest time in the first session, which will determine the 10 riders who progress automatically to Q2 if it is wet again on Saturday morning.

The Pramac Ducati rider said it was taking riders time to come to grips with the revised Sepang.

"Riders are not really comfortable with the circuit at the moment, especially with these wet patches," Redding told MotoGP.com.

"It was quite good, except the wet patches on the circuit. It's not like a dry line, like when it rains it dries.

"There are some parts on the racing line, which is quite dangerous, but we get to understand where they are.

"As for the last corner, for me, it's not a big difference - OK the corner is different, but I expected a lot less grip.

"When you see the track, the track looks dirty, but the grip was actually OK.

"So for this morning I came from far away because I was quite nervous and then when I managed to improve the feeling the lap time became better and I was really happy."