The pair started fourth and 13th at Le Mans after contrasting Saturdays, but Pedrosa leapt up to seventh on the first lap.

He battled Ducati's Andrea Dovizioso before making a move stick on the front straight, then forced his way past Crutchlow at Turn 6 to take fifth later on lap 11 of 28.

The pair made contact at the apex, with Dovizioso capitalising to also pass Crutchlow.

While Crutchlow was relaxed about the move, he said that the fact Pedrosa is listed as weighing 51kg compared to his 70kg would have made the outcome different the other way around.

"I have no hard feelings at all, and to be honest he probably couldn't see me because he was hanging off the bike on the inside.

"And I did run wide, I was wide, my corner speed was slow and I was wide because of the front tyre.

"If I hit him with that impact, he'd have been on the floor because he is so light, so we'll have to see in the next races what happens." 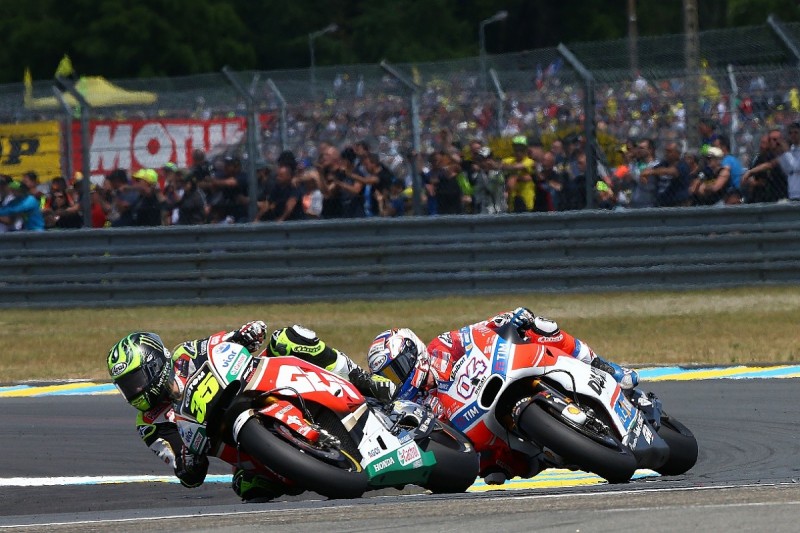 Crutchlow spent the balance of the race battling Dovizioso, getting ahead again with seven laps remaining but then being passed by the Ducati with three to go.

Valentino Rossi's late crash meant Dovizioso finished fourth, with Crutchlow grabbing a third top-five finish of the season after struggling to get his LCR Honda turned with the harder front tyre.

"I let Dani through because I couldn't turn, Dovi came through, and then it was a difficult race," he said.

"With 10 laps to go I thought I could come back and really make a charge, but I got to Dovi and his pace was really slow.

"I passed him and he somehow managed to follow me. But I know when they are in the slipstream they gain so much time, so, so much time.

"He was losing in front of me six tenths a lap, and when he was following me he was gaining those six tenths back, because he just stayed in the slipstream.

"And then he pressed the [engine-setting] switch in the end to give him the rocket and he blasted me in the back straight, and that was it - goodnight Vienna.

"But I'm happy to finish. The aim was to finish in the top six and we finished fifth.

"If I really needed to have push more I probably could have, but I thought I needed to finish."