Championship leader Fabio Quartararo dominated FP2 for the MotoGP British Grand Prix on his Yamaha despite suffering a heavy crash and injuring his ankle.

The Yamaha rider’s session would come to a crunching halt just moments after he’d gone fastest, when he suffered an off-throttle highside at the Vale left-hander while running the hard rear tyre.

Quartararo was slow to get to his feet and initially needed to be helped away by the marshals as he struggled to put weight on his left ankle – though was soon able to walk unaided and find his way back to his Yamaha garage.

The overcast conditions from the morning remained for the 45-minute FP2 session, but the increase in grip on circuit meant combined lap time improvements were quick to come in.

Aprilia’s Aleix Espargaro set the early pace with a 2m02.484s, before Quartararo edged ahead with a 2m02.447s.

While Quartararo’s dramas were unfolding, Aleix Espargaro managed to produce a Friday-best effort of 2m00.670s, before improving to a 2m00.467s.

Quartararo rejoined the session on his second bike with just over 20 minutes remaining and was soon lighting up the timing screens despite running a soft front tyre with more than 20 laps on it.

Quartararo took over top spot again with a 2m00.138s on a fresh medium rear, improving to a 2m00.132s with just over 10 minutes of the session to run before he returned to the pitlane.

In the closing moments, Quartararo’s lap time came under threat as most of the grid fitted fresh soft rubber for a time attack.

But Quartararo would put himself well out of reach with his penultimate flying lap, the Yamaha rider going eight tenths clear of the field with a 1m59.317s.

He would go unchallenged as the chequered flag fell, with Ducati’s Jack Miller ending up as his closest rival in second – albeit 0.512 seconds adrift. 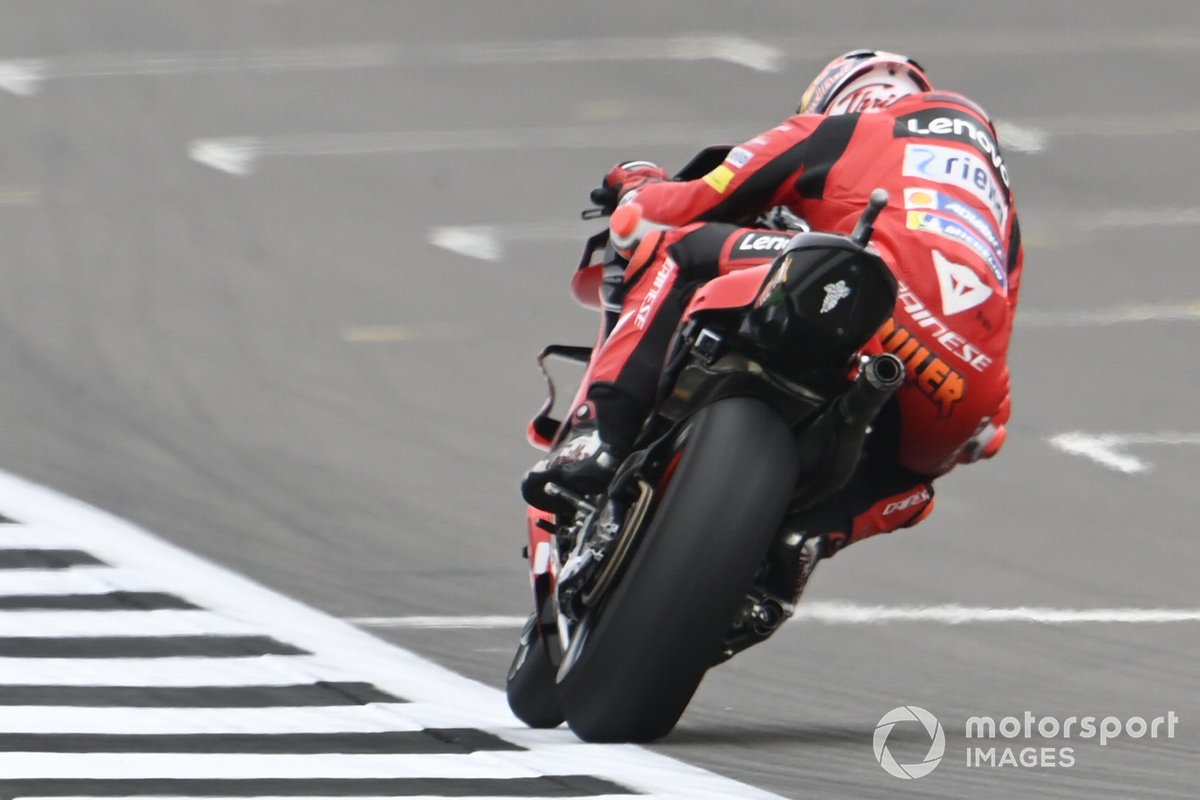 Styrian GP race winner Jorge Martin made a late charge to third on his Pramac Ducati, with Pol Espargaro heading Honda team-mate Marc Marquez to round out the top five.

Francesco Bagnaia was sixth on his factory Ducati from a frustrated Aleix Espargaro, who had his final flying lap baulked by his brother Pol up at the Stowe right-hander.

KTM’s Brad Binder made a substantial lap time improvement in FP2 to a 2m00.315s to end the day eighth ahead of Suzuki’s Alex Rins and Valentino Rossi on the Petronas SRT Yamaha.

Reigning world champion Joan Mir was 13th as he continued to learn the Silverstone circuit, with Johann Zarco on the Pramac Ducati trailing him.

Cal Crutchlow was 16th on the factory Yamaha, with fellow Briton Jake Dixon 21st on the two-year-old SRT Yamaha having found 1.3s on his FP1 time this afternoon.

Lorenzo Savadori continues to struggle with his broken ankle on the Aprilia, ending Friday last and 5.8s off the pace.