Yamaha’s Fabio Quartararo has taken his fifth-straight MotoGP pole in a tense qualifying for the Catalan Grand Prix, beating Jack Miller who crashed late on.

No rider since Marc Marquez during his dominant 2014 season has scored five poles in a row, while no Yamaha rider since Jorge Lorenzo in 2010 achieved that feat before Quartararo ended that drought with a 1m38.853s in Q2 at Barcelona.

Aprilia’s Aleix Espargaro set the initial benchmark at 1m39.834s, though this was immediately bettered by Quartararo with a 1m39.351s.

At the same time, Petronas SRT’s Valentino Rossi crashed at the Turn 4 right-hander on just his third Q2 appearance of the season.

This didn’t trouble SRT team-mate Franco Morbidelli’s first flying lap, the Italian edging ahead of Quartararo with a 1m39.274s. 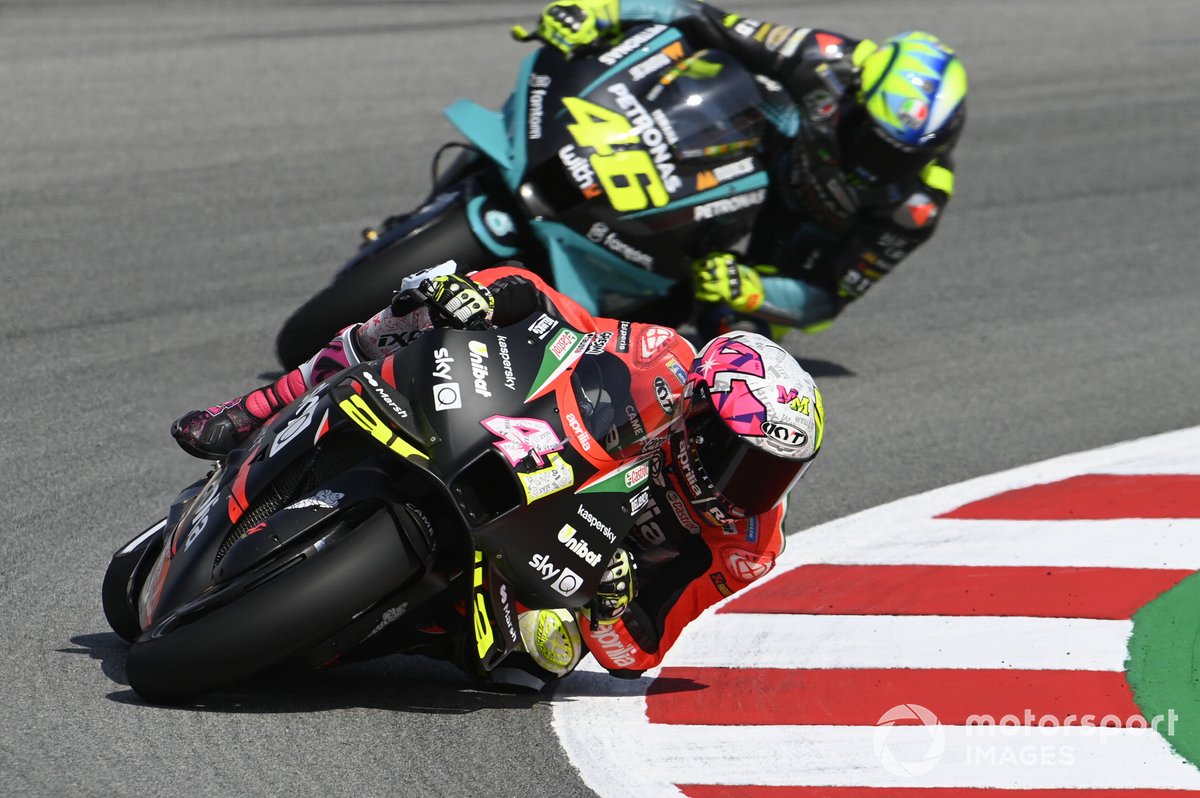 But Quartararo was flying on his second lap and stretched his advantage to 0.421s with a 1m38.853s at the end of the first run of laps.

Ducati’s Miller – who came through Q1 - put a lap together that almost dethroned Quartararo in the closings stages, the Australian firing in a 1m38.890s to move up to second and was up the first sector on his following lap when he crashed heavily at Turn 3.

Quartararo’s final lap was on course to be an improvement before it went away from him in the third sector.

This almost proved costly as Pramac’s Johann Zarco started to pile on the pressure on his final lap.

But Zarco couldn’t quite hook it together, jumping up to third to complete the front row ahead of KTM’s Miguel Oliveira and Morbidelli.

Maverick Vinales did hold a place on the front row at the end of the session, but the Yamaha rider was shuffled back to sixth at the death ahead of Aleix Espargaro and Brad Binder on the other factory KTM.

Francesco Bagnaia was ninth on his factory Ducati while Suzuki’s Joan Mir was dumped from third to 10th in the closing stages after his best lap was cancelled for exceeding track limits.

Rossi could only manage 11th after his early crash, while Pol Espargaro was 12th after crashing late on.

Marc Marquez picked Miller as his victim to follow in Q1 in his bid to lift himself into the pole shootout session.

But the Honda rider was ultimately denied by his team-mate Pol Espargaro, with Marquez missing out by 0.011s in 13th ahead of LCR’s Takaaki Nakagami.

Jorge Martin was a solid 15th in his first qualifying session since the Doha GP at the start of April on the Pramac Ducati, with Tech3’s Iker Lecuona stranded in 16th after a late crash at the Turn 9 right-hander.

Avintia rookie Enea Bastianini will start from 17th ahead of the sister Tech3 KTM of Danilo Petrucci and Avintia team-mate Luca Marini, while Alex Marquez (LCR) and Aprilia’s Lorenzo Savadori round out the grid for Sunday’s 24 lap Catalan GP.