Marc Marquez claimed his fourth victory of the MotoGP season in an epic Dutch TT at Assen, making a late break from a frenetic six-way scrap

Honda rider Marquez's winning margin of 2.269 seconds did not do justice to how close the race was for almost all of its 26-lap distance, with the reigning champion only taking the lead definitively with four laps to go.

Jorge Lorenzo led the opening half of the race after a sensational getaway from 10th on the grid to exit the Strubben in second behind poleman Marquez.

He then passed the Honda later on the opening tour, helped by his unorthodox soft front tyre selection.

Lorenzo held the lead while Marquez became embroiled in battle with Valentino Rossi, Andrea Dovizioso, Alex Rins and later Maverick Vinales for second place, although Lorenzo was never able to extend his gap at the head of the field by more than a few tenths.

At one stage Lorenzo was rear-ended by Rossi approaching the final chicane, an incident that both riders somehow survived without losing places.

Rins briefly grabbed second after muscling Marquez wide exiting the Strubben at half-distance, a move he was investigated but not penalised for, with Marquez repaying the favour two laps later. 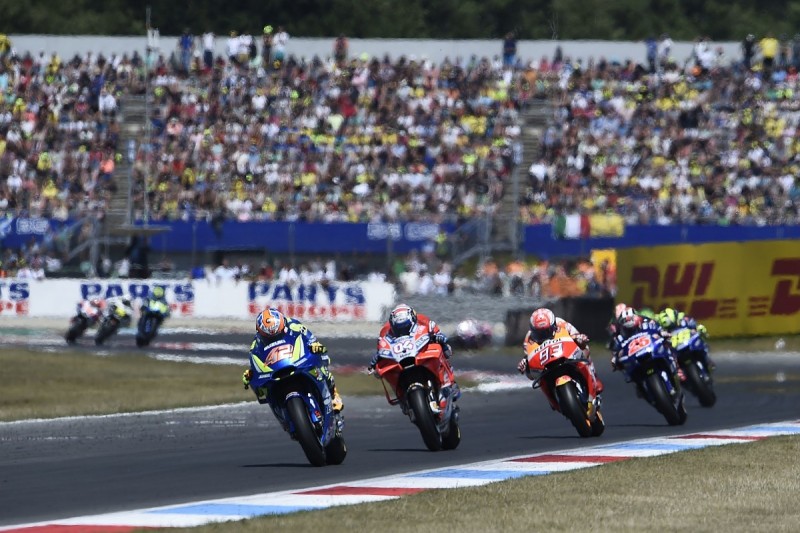 Moments prior, Dovizioso moved up to second and then passed Ducati team-mate Lorenzo to lead on lap 15, the Italian holding the advantage until a resurgent Vinales passed him four laps later.

Immediately, Vinales suffered a moment that brought Marquez and Dovizioso on to his tail, before Marquez grabbed the lead for the first time since the opening stages with six laps left.

The following lap, Marquez and Vinales both ran wide at Turn 9 debating the top spot and allowed Dovizioso and Rossi into the top two places, with Rossi momentarily leading after passing Dovizioso into the last chicane.

Rossi's spell at the front of the field was shortlived and by the time the field came through the Strubben on lap 22 Marquez was back ahead and into a lead he wouldn't relinquish.

Behind, a titanic scrap for second was ultimately won by Suzuki man Rins - who managed to overcome Vinales on the final lap to secure his best-ever MotoGP finish by just 0.039s.

Dovizioso dropped to fourth on the penultimate lap and fell just a tenth short of making it back on to the podium, while Rossi was ruled out of victory contention when he ran wide at Turn 1 on the same lap - dropping to sixth but managing to get back bast Cal Crutchlow for fifth place.

Lorenzo faded to seventh place in the closing stages, losing contact with the leading group, and was followed home by Johann Zarco and Alvaro Bautista.

The second Suzuki of Andrea Iannone was never a factor and finished 10th on the road, which became 11th behind the Pramac Ducati of Jack Miller after a two-second penalty for corner-cutting was applied.

Danilo Petrucci was the sole crasher, although satellite Ducati men Karel Abraham and Xavier Simeon also both failed to go the distance.