Reigning MotoGP champion Marc Marquez led the way in Saturday morning's third practice session for the Dutch TT at Assen, leading Maverick Vinales by a single thousandth of a second

Vinales' Friday benchmark of 1m33.378s didn't get beaten until the very closing stages of the 45-minute session, as riders made soft tyre runs to ensure their place in the top 10 and the automatic Q2 spots.

LCR Honda's Cal Crutchlow moved to the top spot on a 1m33.347s, giving himself a two-tenths of a second cushion over the field, before works rider Marquez - who had led the majority of the session - bettered that benchmark by 0.006s.

Behind Crutchlow, Valentino Rossi was just 0.047s off the pace in fourth on the second of the factory Yamahas, while Suzuki's Andrea Iannone made it five riders with a tenth of the pace.

Lead Ducati rider Jorge Lorenzo was almost a further four tenths back in sixth place, but was seventh overall in combined practice rankings behind Pramac's Danilo Petrucci - who failed to better his Friday time. 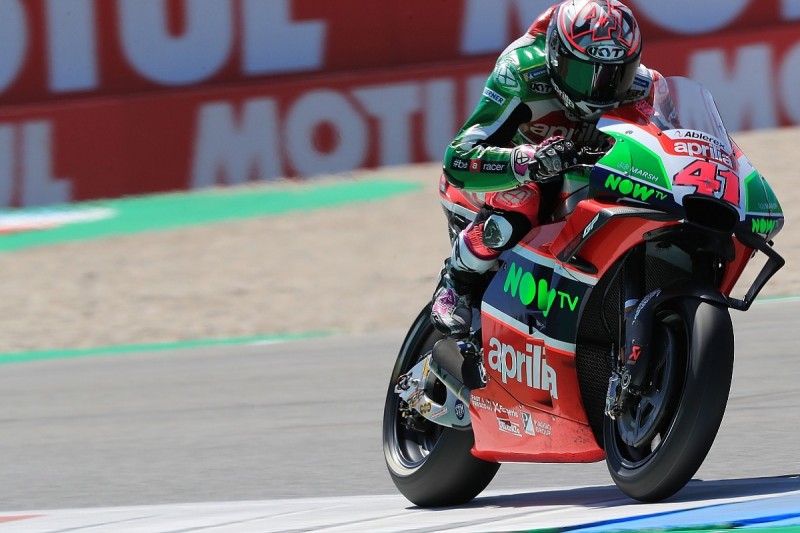 Completing the top 10 overall were Aleix Espargaro (pictured), Alvaro Bautista and Andrea Dovizioso, who also qualified directly to Q2 on the strength of his Friday time.

Pol Espargaro managed to bring the KTM inside the top 10 for the session, but fell 0.056s shy of a place in Q2.

Joining Espargaro in Q1 are a host of other big names, including Johann Zarco, Jack Miller, Alex Rins and Dani Pedrosa.

It marks the first time this season Zarco has failed to qualify directly to Q2.

In a relatively incident free-session, the only crasher was Marc VDS Honda's Franco Morbidelli, who was taken to the medical centre for checks after a high-speed off at the Ruskenhoek.