MotoGP points leader Marc Marquez says he was "fighting against the bike" for the whole Aragon race, despite the Honda rider emerging victorious

The Spaniard failed to get pole position at his home track for the first time in his MotoGP career, due to him crashing in Q2.

However, he was in the lead group during the race and overtakes on Andrea Dovizioso, Valentino Rossi and Jorge Lorenzo allowed him to take his fifth win of the season.

Marquez made a couple of mistakes during the race and the Honda rider admitted he took many risks because he struggled more with the bike than he had expected to.

"I was thinking that I will feel better this weekend and in fact, since the beginning, the feeling was not good," said Marquez.

"Just this morning in warm-up I felt good, but again in the race, I was struggling a lot.

"I'm very happy for the victory but I am happier because I didn't feel like I expected with the bike.

"Since the first lap I felt not so good, I was fighting against the bike all the race. I nearly crashed many times.

"In the beginning, I didn't feel good, but I was trying to keep down, try to understand what is going on.

"At one point I say 'okay, now I push' and I started to push, and trying to overtake Valentino [Rossi] I made a mistake and I nearly crashed, I went wide again, I lost all the distance.

"I did that again for another time, of course when you do this kind of effort you stress the tyres more, you stress everything more.

"It was very demanding because in left corners I was feeling good, [but in] right corners I was really critical with the front and nearly crashed a few times." 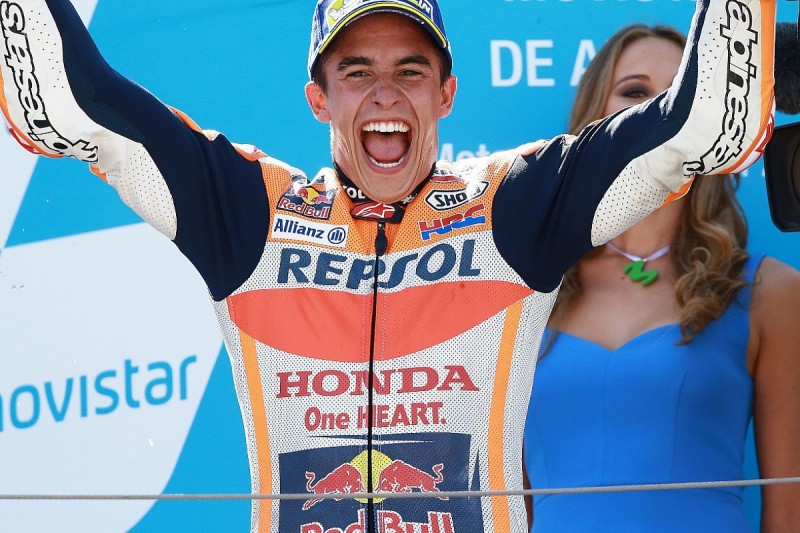 Marquez says he was torn between settling for a podium position and pushing for the win, eventually opting to go all-out because he was racing on home soil.

"The fact I was racing at one of my favourite circuits at home gave me this extra motivation to keep pushing all the race," he added.

"When I caught Lorenzo again I say 'okay now it is time to push, time to keep my pace' because I saw that Dani [Pedrosa] was coming faster and faster.

"Inside of me one thing was, 'the feeling is not good, we need to finish the race'.

"But another thing that was warming inside of me, 'at home race you must try, you must attack', and we did.