Ex-Suzuki team manager Davide Brivio has revealed the Japanese marque reached out to him through Facebook to enquire if Valentino Rossi would be interested in joining for its MotoGP comeback.

Brivio helmed Suzuki's MotoGP squad from 2013 to 2020, guiding it back to world championship status again last season with Joan Mir, before announcing his departure last week to become Alpine's racing director in Formula 1.

For its comeback season in 2015 - having withdrawn from MotoGP at the end of 2011 due to financial problems - Suzuki fielded Aleix Espargaro and then-rookie Maverick Vinales.

Brivio left his role as team manager of Yamaha in 2010 and followed Rossi to Ducati in 2011 handling his personal affairs.

In an interview with motogp.com, Brivio revealed Suzuki's current MotoGP project leader Shinichi Sahara reached out to him back in 2012 over Facebook to enquire about the potential availability of nine-time grand prix world champion Rossi - before ultimately securing Brivio as team manager.

"I worked for Valentino Rossi, he had left Yamaha and I was working for him on his personal things, his contracts, etc," Brivio said.

"I don't know how to use it even now. But I started looking at the messages that came in, I saw Sahara's name and he wanted to know what Valentino Rossi's intentions were for the future. 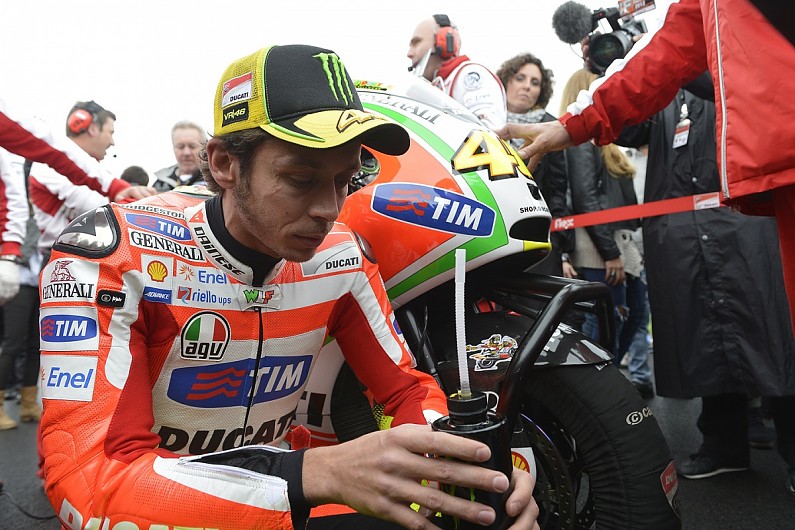 "He told me that they [Suzuki] wanted to return to MotoGP in 2014 and he asked if Valentino Rossi would be available to race for the team.

"I spoke with Valentino, but he said riding for Suzuki didn't interest him. Valentino wanted to go back to Yamaha.

"And so I graciously replied to Sahara to let him know that Valentino was not interested.

"And then we started to talk a bit and Sahara asked me in the case he started a team in Italy, would I be interested?

Rossi would return to Yamaha's factory squad in 2013 following his two-year career nadir at Ducati, remaining with the Japanese team through to the end of last season.

He will remain a Yamaha rider in 2021, but will join the satellite Petronas Sepang Racing Team with factory-support.

Suzuki ultimately deferred its full-time return to MotoGP from 2014 to 2015, and by its second season was a race winner again.

Earlier in January Suzuki confirmed it would not replace Brivio in 2021, instead undergoing an internal restructure to redistribute the Italian's former duties.