© 2020 Autosport.  All rights reserved.
Previous / Morbidelli had to go "all or nothing" in Teruel GP
Next / Morbidelli's Teruel GP victory was like "a trip"

Alex Marquez says his crash in the MotoGP Teruel Grand Prix was his own error, but believes it's better to "make a mistake fighting for the podium" than just points.

The Honda rider had worked his way up to fourth from 10th on the grid, but crashed going through the Turn 2 right-hander on lap 14.

Marquez was the only rider to go with the hard front tyre in Sunday's, but says this wasn't the reason for his crash and that it was simply a mistake on his part.

This crash marked the first non-finish of his rookie season, though he was still buoyed by his performance up to that point.

"The hard front tyre was not the reason for the crash because on the right side it was exactly the same compound like the medium; just the hard tyre was different on the left side, which was a little bit harder," Marquez said when asked by Autosport if his tyre choice had anything to do with his crash.

"But I made a mistake. Was not a fall for some special reason.

"I did a mistake [because] I was a little bit faster, with a little bit more gas and I closed the front. I didn't check it on the data because for me it was clear the mistake.

"But it's true it's my first real mistake in a race and it's better to make a mistake fighting for the podium than fighting for points. So, we need to take this experience for the future.

"I think we did three really good weekends in a row. We were again fighting for the podium coming from P10. 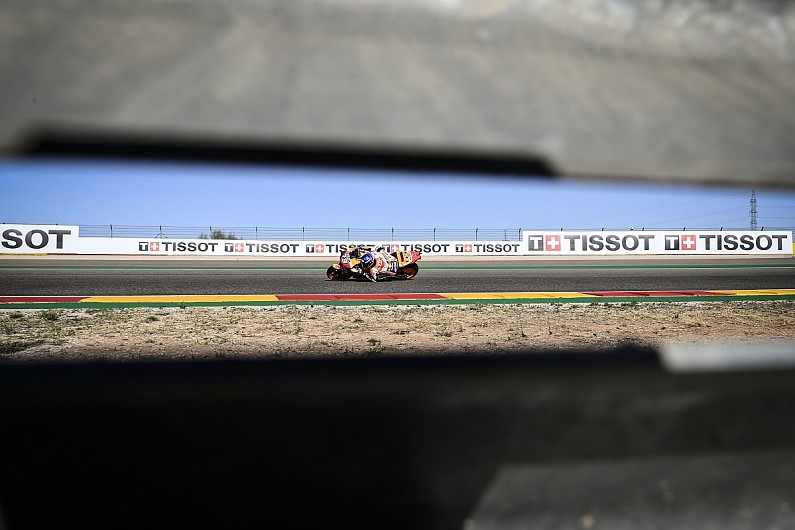 "So, we can just be proud, happy, motivated for Valencia to continue in this way and to don't change our mindset.

"Our target is the same, to be in top 10 and continue the work we did here."

Marquez was running just 1.4 seconds behind the Suzuki of Joan Mir in third when he crashed and believes challenging the championship leader for his third-straight rostrum was "realistic" - though concedes repeating his charge for victory from the first Aragon race was unlikely.

"Starting from 10th is always difficult," he added. "Also, at this moment we're not using the start device and we're penalised a little bit at the start from that.

"The confidence and the rhythm was really good, I was coming step by step and making overtakes in a good way.

"So, this was already good from the beginning. I was just trying to control because I knew [Alex] Rins and [Franco] Morbidelli were so difficult to catch because the pace was so good.

"But I think today - being realistic - I was able to fight with Mir for the podium. But they were better than me, they didn't make any mistakes and I made a mistake. So, we need to learn from these mistakes."