Fabio Quartararo admits he is "a bit worried" about Sunday's MotoGP Teruel Grand Prix as he does not "have the real pace" to fight for a strong result from sixth.

The erstwhile championship leader qualified off the front row for the first time since the Styrian GP on Saturday at the second Aragon round in sixth, putting this down to changes to his Petronas SRT Yamaha not working as strongly over one lap as they did on a long run.

Quartararo admits he "never found the feeling" he needed to be a podium contender since arriving at Aragon last week.

Though he feels his pace is stronger than it was last week, he concedes it's not currently enough to challenge for the podium on Sunday.

"But everyone improved, the pace is much better for everybody.

"I think we are missing two or three tenths on the pace to be in a great position for tomorrow.

"It looks like everything is ok, but some corners are really bad.

"So, we need to find something, not so easy to find it because we've been trying to improve this sector for a week, but we're not really improving.

"The front pressure problem (which dropped him to 18th in the race last Sunday) looks like it's solved, so I'm quite happy about that.

"I'm a bit worried about tomorrow, because I don't have the real pace to be able to fight for a great result, so I'm a little bit worried but I will improve. 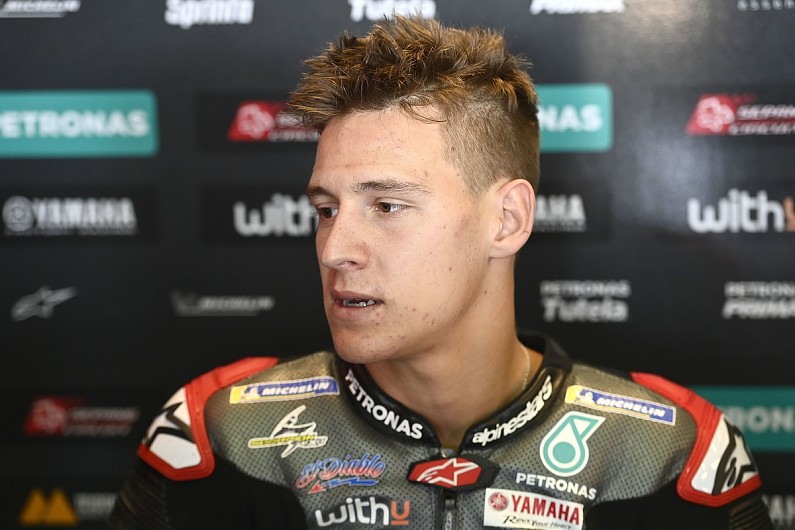 "The team will improve and I think it's important to have a good warm-up tomorrow, not in terms of position but in terms of feeling."

When asked what corners he was struggling at, he explained his Yamaha wasn't turning well through the long right-handers at Turn 10 and Turns 16/17 - corner types where the M1 typically excels - and feels he is "losing three tenths" there.

Championship leader Joan Mir, who heads Quartararo by six points in the standings, could only qualify 12th after making an error on the timing of his last run in Q2.

The Suzuki rider didn't set a representative time in the opening stages of the session and rolled out of a lap late on when he saw the yellow flags for Johann Zarco's crash at Turn 16.

Mir thought he had time left for one final lap, but took the chequered flag with the 1m47.642s lap he'd rolled out of, leaving him in 12th.

"In the last sector I saw the yellow flag so I rolled a bit off to save a bit of tyre because I thought I had one more lap and then the chequered flag was there," Mir explained.

"Anyway, the 1m47.6s is not actually really bad if I rolled off on the last corner. It is not the position we expected today.

"The strategy for today was not the perfect one, but it is what it is.

"We made a mistake and [what is] important is tomorrow. If the temperature is like today it can be a great possibility to use the medium front.

"With the soft, I can repeat what happened in the last race where I had problems [with wear]."