Alex Marquez says his MotoGP champion brother Marc told him not to show up to the Teruel Grand Prix "with the aim of winning" following his Aragon GP podium.

Honda rookie Alex Marquez finished second in last weekend's Aragon round having taken his maiden podium the week before in the wet French GP.

Marquez topped FP1 at Aragon for the Teruel GP on Friday and was sixth on the combined time sheets.

Admitting last weekend that regular podiums were not "realistic" for him to aim for in the remaining races, Alex has revealed his brother advised him not to "go crazy" if this weekend proved to be more difficult.

"Marc tells me not to show up here with the aim of winning," Alex revealed.

"He insisted that if for some reason I was a little slower this time, I shouldn't go crazy.

"This circuit suits me and the bike well. We will see how we go elsewhere."

Much has been made about the changes to the bike Honda has made in recent rounds, with the introduction of Ohlins' new rear shock absorber and an updated chassis the most notable. 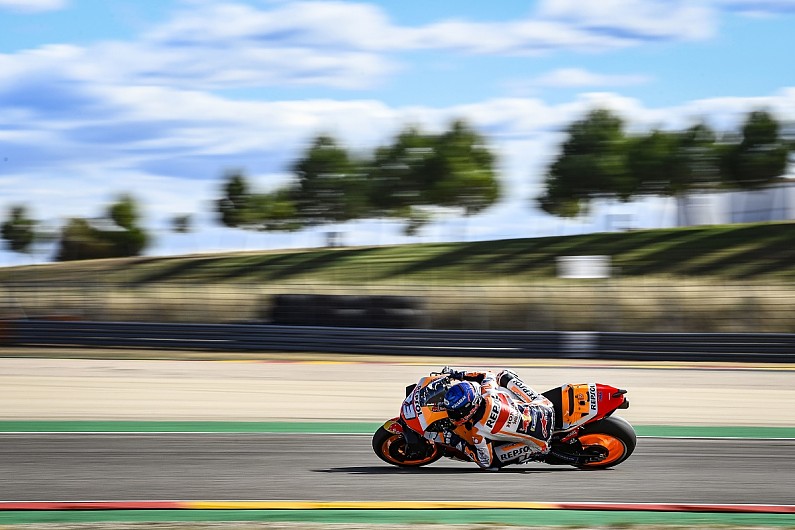 But Alex Marquez insists the turning point for him was simply "a change in mentality" during the post-San Marino GP test at Misano last month, where HRC also tried its updates.

"After the Misano test to here is like a different Alex, or a different riding style also," he said.

"The test in Misano was fresh for me because, I say many times, from Qatar I didn't have the opportunity to have one free day testing with the bike... not to test many things on the bike, just to catch the feeling, because in Misano in the test we tried many things.

"But at one point in the day I said 'now we already tried everything, now just give me some tyres and leave me alone on the track to try things on the bike, try to be smooth, try some things, and catch the feeling and confidence you need with this bike.

"And this was the key. It's true that Honda did a good job and give us good things that were good to get that feeling and that confidence that I had in Malaysia in the first test.

"But a part of that, I think it was a change in mentality and a change in approach to a weekend from Misano 2."