Aleix Espargaro says "it's not easy to be positive" as he "can't go faster" than he currently is on the Aprilia following his 13th at the MotoGP Aragon Grand Prix.

Espargaro has finished inside the top seven at Aragon since he joined Aprilia in 2017, but could only manage 13th last Sunday and 14.5 seconds from the win despite qualifying ninth.

The Aprilia rider has only finished within 10s of the victory once this year, though this was in the restarted 12-lap Styrian GP in August.

Espargaro calls Aprilia's inability to break this barrier regularly its "limit" and insists he can do no more on the 2020 RS-GP.

"For me it's not easy to be positive because I cannot be fast," he said in reply to a question from Autosport.

"I pushed like hell, I gave everything what I had. But it's always the same result, I can't go faster. 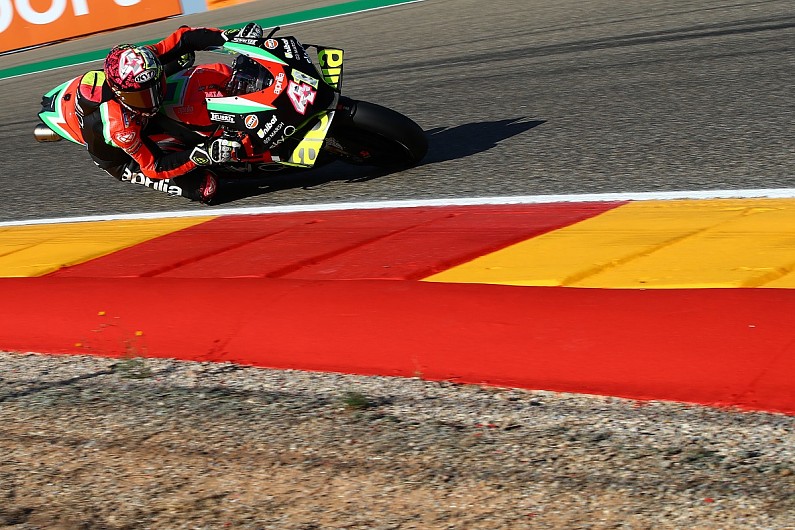 "We always finish about 10, 12, 14 seconds from the winner, which is not super far, but it's always like this.

"This doesn't make me happy."

Espargaro raced a fresh engine in the Aragon GP, which he claimed on Saturday offered him up to 10km/h more on top speed than the unit he's been running in previous races.

However, he says it was "impossible" to overtake on the back straight - though was encouraged by the fact he didn't lose ground while running in the slipstream of a rider ahead.

"I started the race with a fresh engine," he said when asked by Autosport if he was able to convince Aprilia to let him use the newer engine.

"In the straight it was impossible to overtake. But at least I didn't lose any time in the draft.

"But the problem is when they take my draft, they catch me in the straight.

"But I have to say that following them in the draft, at least I wasn't able to lose any time.

"So, glad that we were able to use the fresh engine."