Maverick Vinales admits the "weak points" of the Yamaha won't be made better and will now focus fully on the "DNA" of the M1 after Sunday's MotoGP Aragon Grand Prix.

Vinales led for the opening seven laps the Aragon race before an unexpected rear tyre drop on the left-hand side left him powerless to stop eventual winner Alex Rins, Honda's Alex Marquez and the sister Suzuki of Joan Mir coming through to relegate him to fourth.

The Yamaha rider had been amongst the strongest on race pace throughout the Aragon GP weekend and had shown no similar tyre wear issues in practice long runs.

Tyre wear and traction have been typical problems for Yamaha in recent years, and Vinales notes whenever he focuses on improving the bike's weak points "we don't make a good race".

As a result, his full focus will be on maximising the M1's main strength of corner speed and front-end stability.

"We understand [that] the weak points we won't make stronger, but the strong points we can make stronger," Vinales, who is now just 12 points off the championship lead, said on Sunday.

"So, we're going to work on the line that the Yamaha likes to go on track and see if in the next race I can start again first, to push and have a faster rhythm.

"For me, it looks like every time we try to improve the weak points we don't make a good race. So, we need to focus on the Yamaha DNA. We will try to make the strong points stronger, which is corner speed and stability in the front.

"So, in the last corner, if this time I was not fast then next time I will try to make much more corner speed and see how it works.

"We need to work a bit more with the front to give me a bit more confidence so I can carry the corner speed. 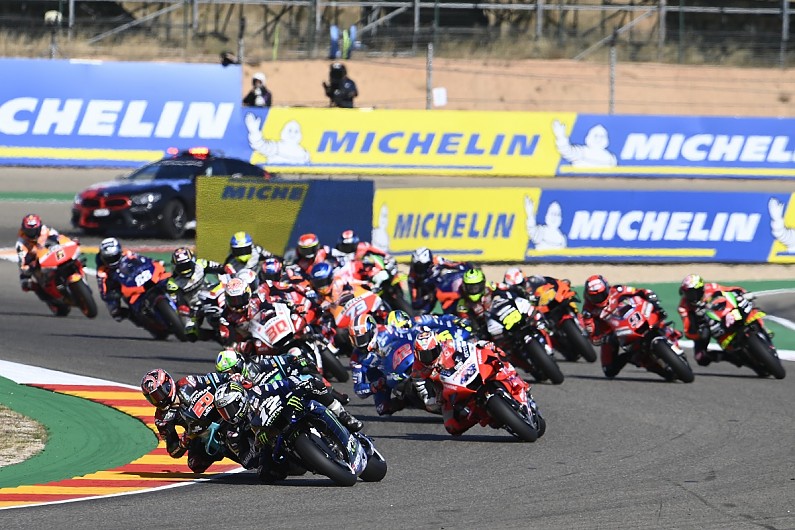 "It's the only way we can go faster and if we concentrate to find more grip on the rear... we didn't do it in three years, so we're going to concentrate on the front, trying to be fast, gaining more corner speed and seeing if the lap times are better or not.

"On one lap, the bike is fantastic already, but now we need to improve because the competitors have improved."

Vinales' early stint at the front offered him "a big [boost] in self-confidence", as he has too often struggled to have frontrunning pace in the opening stages of races.

Despite his grip woes, Vinales rallied in the closing laps to put Mir - who was struggling with the front tyre late on - under pressure, admitting he was "closing his eyes" in the last two tours.

"I did the last two laps closing my eyes because I wanted to have the opportunity, or at least to push Joan so that maybe he made a mistake," he added.

"But finally, he didn't make a mistake, he had everything quite under control. But I tried. It was good because I know if I needed to try, I have something more in the last laps. So, it's good for the next races."