Maverick Vinales says he "lost the way" in setting up his Yamaha for the Catalan Grand Prix weekend, which contributed to his lowly ninth-place finish in Sunday's MotoGP race.

The Yamaha rider had strong race pace throughout practice and was expected to challenge for victory on Sunday, but got swamped on the run to Turn 1 due to the M1's lack of acceleration.

As a result, Vinales was 16th at the end of the first lap and ended up just "cruising" for the first 16 laps as he could not overtake the Aprilia of Aleix Espargaro or LCR Honda's Cal Crutchlow.

He eventually got past both with a "crazy move" and recovered to ninth, but feels he tried "too much" to improve edge grip across practice which meant he "didn't know what to choose" in terms of set-up for the race.

And Having come from a dominant Emilia Romagna victory last weekend, Vinales admits his "disaster" Catalan GP left his head "crazy" because "I don't understand nothing".

"Nothing went to plan," Vinales said.

"We tried to take the maximum points, but anyway it's remaining like always; [for] four, five years we have no power.

"So, I lose a lot of places at the start. Not on the initial part, but in the second part of the start.

"We started the race knowing that, but for me what's very frustrating is I passed 16 laps fighting behind Aleix and Cal, and I could not pass - impossible.

"Only time I passed was at corner five, braking on the outside. Crazy move, which I risked crashing a lot.

"But this is what happened. But when I go alone, I had really good lap times. 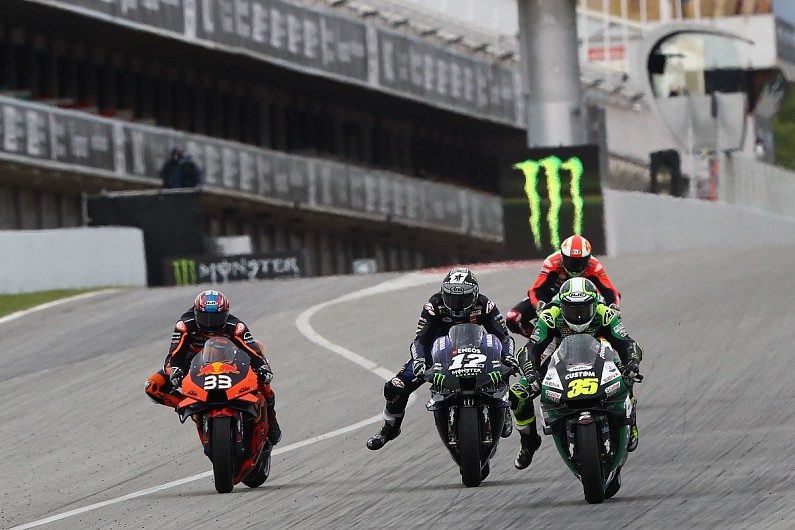 "When you get stuck behind someone, you cannot pass [on the Yamaha], this is the main problem.

"But all weekend I was struggling on banking with the grip and we tried many things, maybe too much, and for sure we lost the way this weekend.

"We arrived to the warm-up with a very different set-up and we didn't know what to choose.

"So, when you don't do the correct job, this is the result you have."

Vinales says he was also struggling all weekend with front locking, which also meant he sacrificed performance in other areas chasing a fix for this.

However, he believes had he started on the front row he could have a "completely different result" as he wasn't experiencing the same dramatic rear tyre drop-off the leaders did.

"The problem is this track," he added.

"If you start in front, today would have been a completely different result, because the second part of the race I was very strong with the tyres.

"I didn't have that kind of [wear] issue with the tyres, but when you don't start well with this bike you cannot defend yourself.

"So, the only thing you can do is let laps and laps pass, and until the opponents lose the grip you can't overtake.

"And I just cruised for 16 laps behind Aleix and Cal, they were defending really well because I wasn't able to pass."