Zarco was forced to check up at Turn 2 when the sister works Ducati of Danilo Petrucci had a moment at Turn 2 on the opening lap.

The Avintia rider tucked the front as he braked at lean angle and slid into Dovizioso, who had launched himself from 17th into the top 10, taking both out on the spot.

"The weekend was going pretty well and I could expect good things for the race, and finishing the race at the second corner is really giving pain to the brain, to the stomach.

"I think the start was correct from my side. Danilo did some really amazing braking at Turn 1 and he overtook me, and then we he changed direction he almost fell down because the temperature on the left is very cool and we have to be very careful.

"I just reflexed to not touch him, I was braking and I crashed. 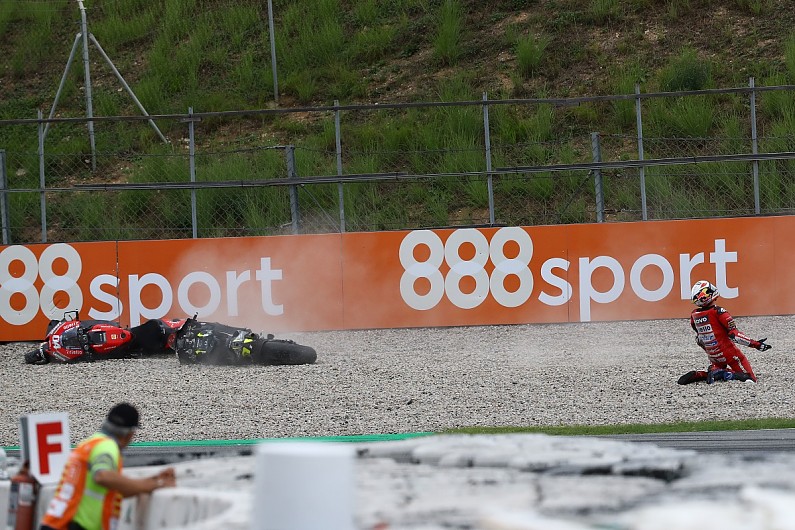 "The problem is when I crashed with Dovi, he could not avoid me and we were two Ducatis on the floor, and of all of them, it's Andrea who is playing for the championship.

"This gives me a sad feeling today and I think if I didn't touch the brakes I would have hit Danilo and it would have ended in the same way."

Dovizioso says he is "frustrated" by the collision with Zarco, but concedes it was merely a "racing incident".

"I think my pace in practice wasn't too bad and I think the pace was very similar to Pecco [Bagnaia] and at the end of the race he was really fast," Dovizioso said on Sunday.

"So, I don't know if he found something or if that was possible.

"It was important to make a good start, and I did it, so I was very happy about that and nothing [else] to say.

"It was a racing incident, so nothing to say about that.

"I am very disappointed especially when something like that happens you feel very frustrated because you couldn't try anything.

"For the championship we lost a lot of points today."