Fabio Quartararo admits he didn't expect Petronas SRT MotoGP team-mate and Catalan Grand Prix poleman Franco Morbidelli to be as fast as he was in qualifying.

Quartararo has outqualified Morbidelli six times this season and claimed two pole positions, but had to play second-best to his 'A-spec-mounted' Yamaha rival in qualifying at Catalunya.

Morbidelli produced the first sub 1m39s lap of the Catalan GP weekend on his final effort in Q2 to snatch his maiden MotoGP pole with a 1m38.798s, while Quartararo could only managed a 1m39.008s in second.

"Yes, I'm really happy because at the end most important thing is to be on the front row," Quartararo said of his Saturday.

"We achieved our goal, let's say. Today Franco was really fast. I expected him to be fast in qualifying, but not that much.

"At the end, I'm so happy about second position and our pace is good so I'm happy about our day."

Morbidelli last outqualified Quartararo at the San Marino Grand Prix at Misano, when he beat him to second before going on to win his first MotoGP race. 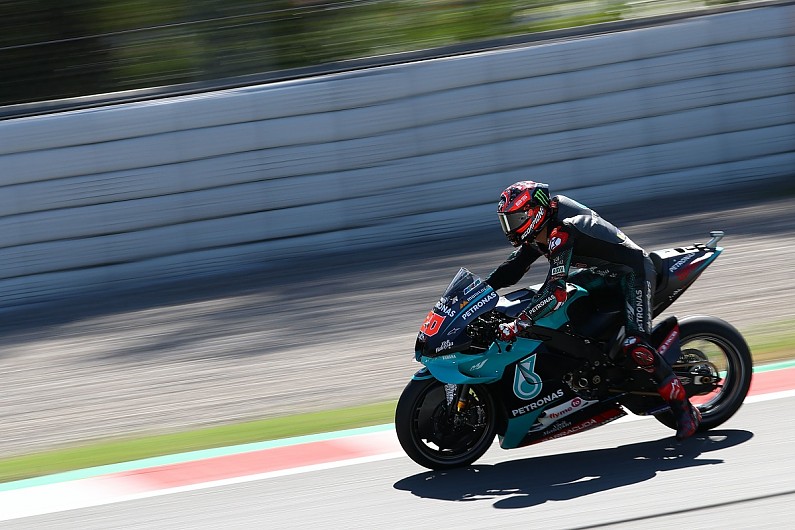 Conceding "it's always difficult" to beat the Frenchman in qualifying, Morbidelli was happy to show he was the best on "pure speed".

"It is great, it feels great to be first," Morbidelli said of his first MotoGP pole.

"Qualifying is pure speed and I was really happy to see today I was the fastest in pure speed.

"It's always difficult to beat Fabio on a hot lap, so I'm very happy about the lap I did in qualifying.

"I was feeling great on the bike, I was able to push a lot on it and able to push very hard on tyres. Great, great feeling today."

Valentino Rossi - whose 2021 deal with SRT was announced ahead of qualifying - completed an all-Yamaha front row having "improved my style" during practice on Saturday.

"It's a good Saturday because we start well from Friday," Rossi said.

"When we start already the bike was competitive, giving me a good feeling and today we worked well because we did some modifications that I liked.

"So, starting from front row is very important also because the first corner is very far, we need to give the maximum from the beginning and try to make a good race."