Fabio Quartararo says he wasn't shown a track limits warning from MotoGP race direction during the Emilia Romagna Grand Prix before he was handed a long lap penalty.

The Petronas SRT rider was battling for the podium with Pol Espargaro and Joan Mir in the latter stages of the second Misano MotoGP race when he was issued a warning for exceeding track limits three times.

Having done so on two further occasions, MotoGP race direction handed Quartararo a long lap penalty on the final lap having just taken third from Espargaro the tour before.

But the SRT rider says he was given no prior warning of track limits abuse and was only sent the message to serve the long lap after he'd passed the penalty loop at Turn 10.

Having not served the long lap, he was hit with a three-second time penalty post-race, dropping him to fourth.

"I got the long lap penalty, but race direction didn't send me any warnings of track limits," he said.

"So, I was a bit surprised. I'm happy about my race because I fight until the end for the podium and this is good for my part.

"Also, I see the long lap penalty when I see on the last lap on the straight [after Turn 10]. 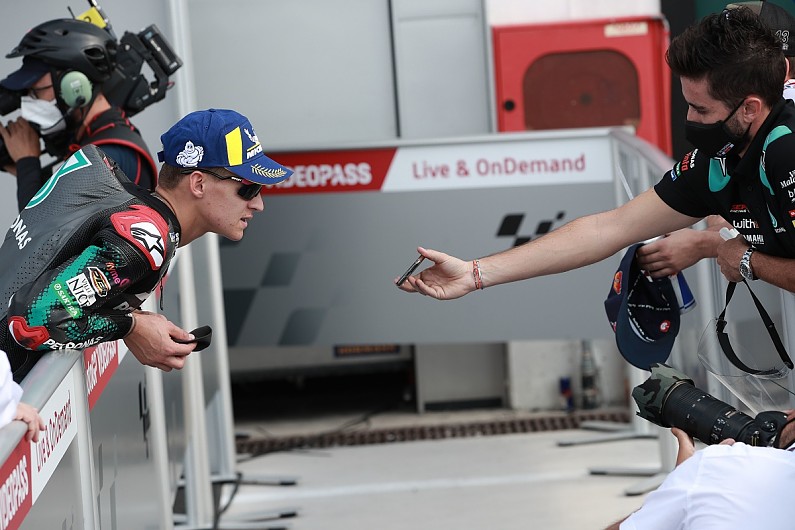 "I didn't see any warning and for me was really difficult to be concentrated.

"But as soon as I saw long lap on the straight I thought it was so strange that I didn't even have a warning.

"This is something they must work on, because when you watch a Moto3 race you see they send a message to the TV.

"But you are not looking at the TV at this moment. So, for me this is a mistake from them and also I exit five times on the green, so it's my mistake too."

Quartararo dismissed suggestion he may have missed a message, claiming he is looking at his dashboard three times every lap.

"I'm watching the dashboard three times per lap," he said when asked if he wasn't looking at his dashboard.

"So, this is something that for sure I will see because you have also an orange light on the dashboard normally when someone sends you a message directly."