Suzuki MotoGP team boss Davide Brivio says having a satellite team fielding GSX-RRs "would help", but admits "it's not essential".

Brivio has made no secret of his desire for Suzuki to expand its presence on the grid in the same way Honda, Ducati, Yamaha and KTM have in recent years by providing factory support to a customer outfit.

Suzuki managed two victories in 2019 with Alex Rins, marking the first time since 2000 that the manufacturer managed a brace of wins in a year.

But Rins's race-winning form deserted him later in the season and his form in qualifying and races proved inconsistent.

Brivio admits not having a satellite team means there is "less possibility to improve" the bike, but adds Suzuki has less "distractions" with only the factory team to focus on.

"Every year we are talking about satellite teams," Brivio said. "We think it will help.

"Sometimes, also this year for instance, we had a weekend with bad weather and with only two bikes on the grid it's maybe more difficult to get information when you have one or two sessions dry or wet.

"Anyway, to have more data, more information, it's clear that you can speed up a lot of development, you can find out more problems.

"So, it would help, but unfortunately we don't have."

He added: "The good point is the company can fully focus on only the two [factory] riders, only the factory team without distractions.

"But the negative part is we have less information, and less possibility to improve.

"But I will say, this year we struggled in two or three races, so the satellite team would help, but also we need to improve the bike and, even with only two riders, we can achieve good performances. 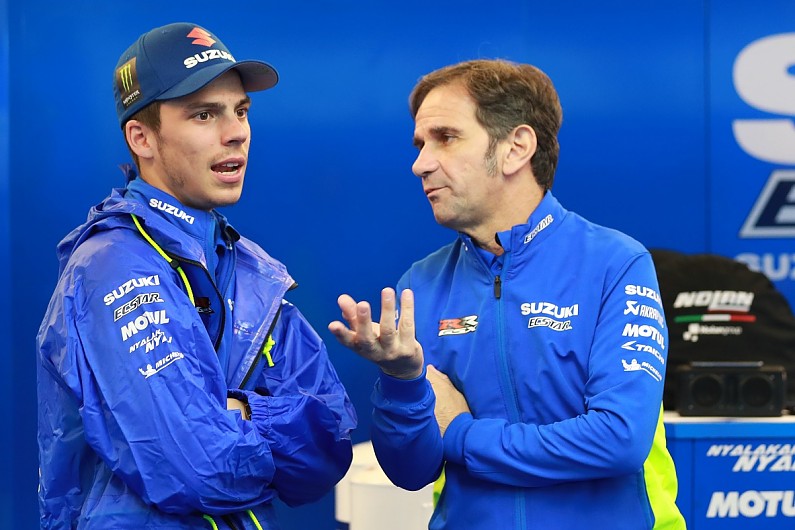 Brivio says Suzuki's pre-season target was to achieve two victories, and now believes the team has the "potential" to fight for the podium every weekend.

"At the beginning of the season our target in our internal meetings, we wanted to win a race or a couple of races and we felt it was the time to try," he said.

"So, from this point of view, we reached a target. We won two races and this was a good achievement for our team, which is - let's say - a work in progress with young riders, young team, everything new...

"It's a positive season, because we won two races and it's been a long time Suzuki was doing that, and also we feel we have a bike that can potentially fight for the podium in 80%, 90% of the tracks this year.

"Sometimes we didn't put everything together, maybe some qualifyings were not brilliant, which made the race difficult.

"But the potential is always there.

"What we're looking for the future is for sure to be more consistent, to use that potential because we have that potential to fight for the podium every race, to stay in the top group."