Marc Marquez and Dani Pedrosa got to try a Toro Rosso Formula 1 car in June and both noted the huge difference between F1 cars and MotoGP bikes.

As a reward from sponsor Red Bull, the reigning MotoGP world champion and his team-mate had a chance to test a modern F1 car around the Spielberg circuit in Austria - where the next MotoGP race will take place this weekend.

Both Marquez and Pedrosa were under the tutelage of former F1 Red Bull driver Mark Webber and the firm's motorsport advisor Helmut Marko.

The Honda riders (and others from motorcycle racing who have previously had the chance to drive an F1 car) agreed that the biggest, and most surprising, difference between car and bike is braking distances.

"Braking was the thing that impressed me the most about the F1 car," Marquez explains to Autosport.

"At the Red Bull Ring with a MotoGP bike, I brake when I get through the 200m mark. Driving the F1 car, I braked after the 50m mark.

"Even after a full day's practice, I had the feeling that I wasn't taking the turn instincitvely. I did it because I was told to do it; but my feeling was that I wasn't getting into it."

"Mostly on the first three corners, the hairpins, the difference between a MotoGP bike and a F1 car is enormous, I would say," he adds. 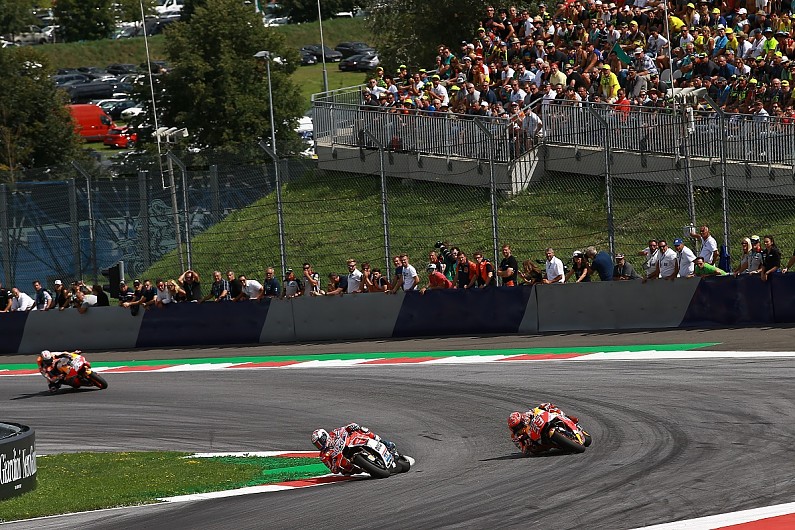 The most aggressive braking points are on the first three turns. At the first one, MotoGP bikes slow down from 199mph to 60mph and riders spend 5.2 seconds touching the brakes.

At that point, F1 drivers have reached 208mph and reduce their speed to 87mph, having their foot on the brake for 1.8s - less than half the time of their MotoGP counterparts.

Those proportions stay the same at the other two hairpins. At the first of these, MotoGP bikes go from 218mph to 25mph in 5s, while F1 cars get to 196mph and hit the brakes for 2.4s to complete the turn at 56mph.

And at the following tight downhill right-hander, while MotoGP riders approach the braking point at 185mph, reducing their speed to 47mph after 4.1s on the brakes, the braking power of F1 cars allows drivers to arrive there at 205mph and press the brakes for half the time: just 2.3s.

Tata Communications brought its expertise in live sports to MotoGP™ in 2017 and enables distribution of its TV feed to 80+ global broadcasters. Together, Tata Communications and MotoGP™ endeavour to bring new media and digital technology that elevates fan experiences