Turkish rider Can Oncu won the 2018 title in the Red Bull Rookies Cup junior series that supports several MotoGP rounds and was given an Ajo KTM Moto3 seat for the Valencia finale.

He immediately impressed by qualifying fourth but then ended up winning the wet race, beating champion Jorge Martin by four seconds after long-time leader Tony Arbolino crashed out.

Ducati's Andrea Dovizioso described Oncu's performance as "something unreal", saying it was astonishing that he had handled the tricky conditions so well with no grand prix experience.

"He manages a difficult race alone, that is the incredible thing," Dovizioso explained.

"We have a lot of experience - when you are in that situation you think a lot of things and this is bad.

"I don't know what he thought during the race but he was fast from the beginning to the end.

"He managed everything in what looked like a intelligent way." 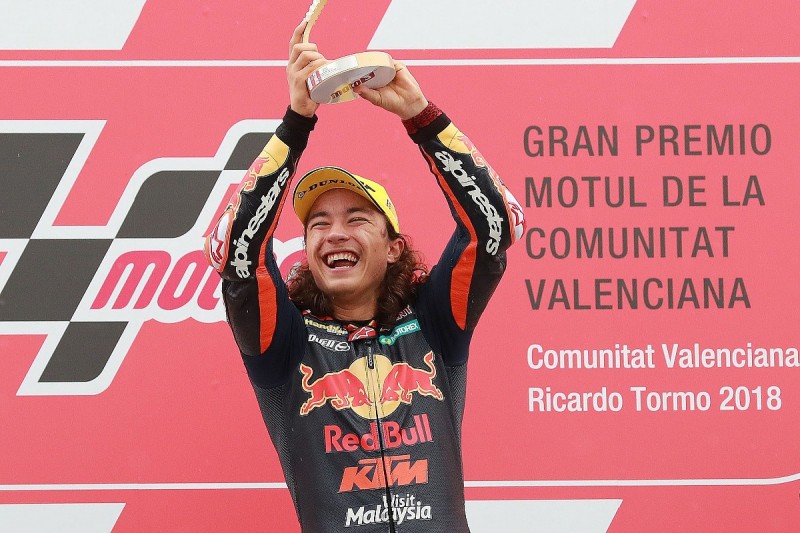 He is already convinced Oncu is a future KTM MotoGP rider.

"This guy is the best," said Espargaro. "He's the best kid.

"I'm super happy that this is in our structure with KTM and Red Bull.

"This kid is going to grow, he's going to show the talent up and he's maybe going to finish in KTM in MotoGP.

"I'm just really proud of what he has done and happy for all the [KTM] family."

Dennis Foggia kept his title hopes alive with victory in the Moto3 Thailand Grand Prix, as Tony Arbolino was declared a first-time winner in Moto2 after rain ended proceedings early.

Former British Moto3 racer Tom Booth-Amos has opened up about a video appearing to show a member of a team assaulting him at the 2019 MotoGP Thailand Grand Prix.