Jaume Masia won a thrilling Moto3 Qatar Grand Prix on his KTM Ajo debut, fending off rookie team-mate Pedro Acosta and Darryn Binder on the run to the line.

Masia has switched from Leopard Honda to Aki Ajo’s KTM squad for 2021, and completed a stunning final lap to claim his fourth career victory by just 0.042 seconds.

Petronas Sprinta’s Binder grabbed the holeshot from pole position, while Gresini’s Gabriel Rodrigo slotted in behind as a pre-race favourite Dennis Foggia (Leopard Honda) was clattered out of the race at Turn 3 by Avintia’s Carlos Tatay - who was handed a long lap penalty for the incident.

Rodrigo powered his Honda into the lead on the run into Turn 1 at the start of the second tour, before a moment later in the lap allowed KTM Ajo rookie Acosta to move ahead.

Such is the power of the slipstream in Qatar, the lead changed hands constantly across the race, with Binder, Rodrigo, Acosta, Ajo team-mate Masia, CIP’s Kaito Toba and Tech3’s Ayumu Sasaki taking turns heading the pack.

The lead group was thinned on lap three when rookie Xavi Artigas out-braked himself into Turn 6 and wiped out Petronas Sprinta’s John McPhee, Jeremy Alcoba on the second Gresini Honda and Avintia’s Andrea Migno. 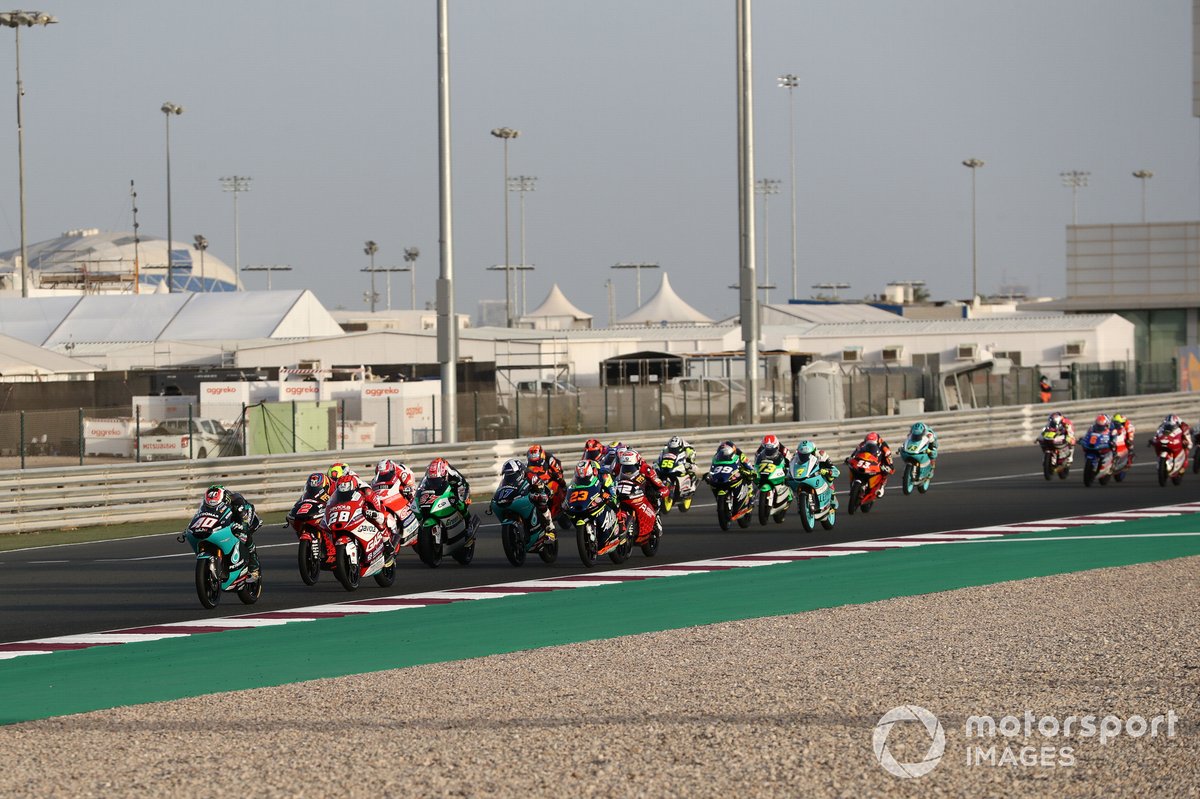 As the race entered its final three laps, the lead group stood at 13 riders, with Sasaki leading the freight train.

He stayed mounted despite a small mistake at Turn 13, but was powerless to stop Masia coming through to lead at the start of the penultimate lap.

As the lead group concertinaed, Niccolo Antonelli found his way through from ninth to first on the penultimate lap on his Avintia KTM.

Masia used the power of the slipstream to reclaim the lead on the run into Turn 1 on the final lap, with team-mate Acosta moving into second while Sasaki’s charge ended with a crash at Turn 2.

Across the final lap Masia did not put a foot wrong, nailing his run out of the final corner to keep Acosta and Binder at bay – the trio covered by 0.052s.

Antonelli was shuffled back to sixth at the chequered flag following his brief run in the lead, with Aspar rookie Izan Guevara seventh on his debut ahead of Toba.

SIC58 Honda’s Tatsuki Suzuki came from the back of the grid to finish ninth having missed the Qatar pre-season test due to COVID-19 - though was promoted to eighth due to Toba exceeding track limits on the last lap.

Jason Dupasquier rounded out the top 10 on the Prustel GP KTM.

Fenati was subsequently promoted to 11th after Tatay exceeded track limits on the final lap.

Artigas pulled out of the race after re-joining from his early collision, with that incident under investigation.