Moto3 rookie Pedro Acosta claimed his maiden victory in a chaotic Doha Grand Prix having started from the pitlane, the Ajo KTM rider fending off Darryn Binder by 0.039 seconds.

Acosta, along with six other riders, were slapped with pitlane starts for irresponsible riding in FP2 on Friday – but the Ajo KTM rookie carved through from nine seconds off the rest of the pack on lap one to score one of the most sensational wins in grand prix history.

Binder grabbed the holeshot off the line from sixth on the grid, the Petronas Sprinta Honda rider one of only a handful to gamble on the soft rear tyre.

The lead group did not thin out as the race entered its later stages, where chaos ensued.

Binder was squeezed out wide by his team-mate John McPhee at Turn 1 on lap 11, dropping the South Africa to 14th, while Alcoba engaged with Tech3’s Ayumu Sasaki for the lead.

Andrea Migno blasted his Snipers Honda to the head of the pack at the start of the following tour, while team-mate Salac’s race came to an end following contact with with Sasaki at Turn 2 on the next lap.

Drama struck at Turn 1 at the start of lap 15 when Gresini’s Alcoba clattered into the rear of Binder and was thrown off his Honda, the bike smacking a helpless McPhee and taking him out of the race. 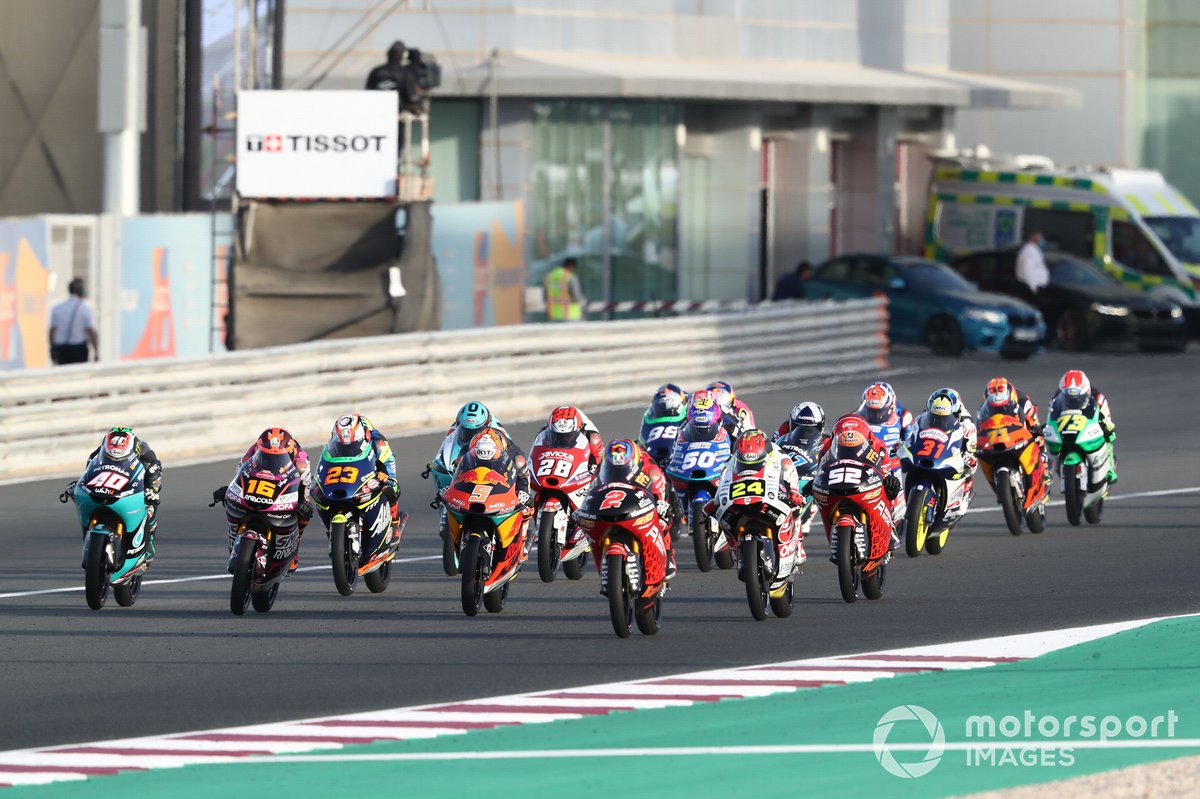 The incident and McPhee’s violent outburst in the gravel afterwards is currently under investigation.

Qatar GP winner Jaume Masia emerged from the chaos of lap 15 to lead on the following tour, while team-mate Acosta worked his way through the top 10 having worked his way from the pitlane.

Acosta led over the line to start the final lap and tried to pull away from Binder behind, though the Petronas Sprinta rider reeled him back in come the end of the tour.

The 16-year-old rookie nailed his run out of the final corner and claimed his first grand prix victory by just 0.039s from Binder.

Niccolo Antonelli completed the top three on the Avintia KTM, pipping Migno and Toba, while Aspar GasGas rookie Izan Guevara recovered from a heavy fall in warm-up to finish sixth.

Sasaki slipped to seventh at the chequered flag, with Ryusei Yamanaka (Prustel GP) heading Masia after the Ajo rider had contact with Rodrigo on the last lap.

Max Racing’s Romano Fenati also came from the pitlane to complete the top 10, while Rodrigo came away with 13th for Gresini after his clash with Masia.

Having served a double long lap penalty for a collision in the Qatar GP, Leopard rookie Xavi Artiga was taken down by Avintia’s Carlos Tatay late on.

Acosta now leads the championship by nine points over Binder heading to the Portuguese GP in two weeks’ time.