Masia's last victory came last year in Argentina well over a year ago and he carved through from the sixth row at Aragon to claim the win by just 0.091 seconds, becoming Honda's 100th different grand prix winner across all classes.

Championship leader Arenas grabbed the holeshot from third on the grid ahead of Ajo KTM's Raul Fernandez.

Fernandez dived past Arenas up the inside of the Turn 4 left-hander, while Tatsuki Suzuki on the SIC58 Honda demoted Arenas to third later in the lap.

The top five group of Fernandez, Suzuki, Arenas, Romano Fenati on the Max Racing Husqvarna and CIP's Darryn Binder made a quick early breakaway from the chasing Leopard Honda of Masia.

Fernandez held onto the lead until lap seven, when Binder came through at the penultimate corner, while the group headed by Masia began to close down the 2.2-second gap to the leaders.

Petronas Sprinta's John McPhee was forced to serve a long lap penalty on the third tour for irresponsible riding in qualifying, which dropped him out of the points to 17th.

But the Scotsman soon rallied and quickly worked his way into the top 10, before moving to the head of the second group ahead of Masia by lap eight.

By lap 11 the lead group swelled to eight as McPhee, Masia and Gresini's Jeremy Alcoba had latched onto the back of it.

Fernandez reclaimed his lead on lap eight, with Binder coming through again on the 14th tour, opening the door for Arenas, Masia and Fenati to demote the Ajo KTM to fifth.

But Fernandez muscled his way back into third on Fenati and Masia with a daring double raid through Turns 4 and 5 on lap 15, while Arenas hit the front at Turn 12.

Fernandez ensured it would be short-lived and returned to the lead at the start of lap 16. 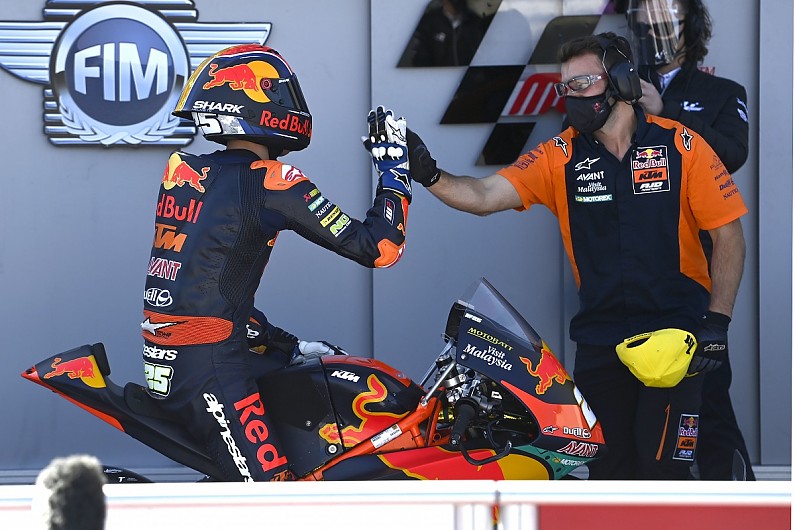 Masia rocketed by Fernandez on the run along the back straight into the long Turn 16/17 double left, but the Ajo KTM quickly retaliated on the brakes into Turn 1.

Once again, Masia used the power of his Honda to blast past Fernandez into Turn 16 to lead the field onto the final lap.

Masia resisted all pressure exerted on him, narrowly avoiding a penalty for exceeding track limits on the run to Turn 12 to give his title hopes a small boost as he moves to within 36 points of Arenas.

Binder came through to second on the final lap for his second podium of the year, with Fernandez holding onto third for his first Moto3 podium.

Fenati was fourth ahead of McPhee - who ran wide at Turn 1 late on - with Alcoba demoting Arenas to seventh right at the death. Suzuki, Celestino Vietti (VR46) and Leopard's Dennis Foggia completed the top 10.

With nearest title rival Ai Ogura only 14th on the Team Asia Honda, Arenas now leads the championship by 13 points, with Vietti 18 adrift.

Despite being absent owing to COVID-19 protocols, having been sat near someone who tested positive on a plane this week, Snipers Honda's Tony Arbolino has only lost nine points to Arenas and is now 29 adrift.

Gresini's Gabriel Rodrigo was taken to the medical centre after a heavy highside crash on lap one.