After crashing out of victory contention in the Misano double-header, CIP's Binder made a last-lap pass for the lead on Leopard's Dennis Foggia to grab the first win of his grand prix career.

Poleman Tony Arbolino - who will step up to Moto2 in 2021 with Intact GP - grabbed the holeshot off the line on his Snipers Honda and held the spot for the first two laps.

Arbolino was slipstreamed by Arenas and Binder on the run into Turn 1 on the third tour, before Gabriel Rodrigo on the Gresini Honda took the lead on lap four.

Petronas Sprinta's McPhee had worked his way up from 12th on the grid to third and was trailing Arenas on lap six when he lost the front of his Honda trying to go up the inside at Turn 4, wiping out the championship leader.

The lead, as usual in Moto3, changed hands a number of times over the next 10 laps, with Binder, Arbolino, Leopard's Jaume Masia, team-mate Foggia and Rodrigo all taking turns at heading the pack.

Foggia (below) retaliated on Binder on lap 15 at Turn 10 having lost the lead at Turn 1 the lap before to the CIP rider. 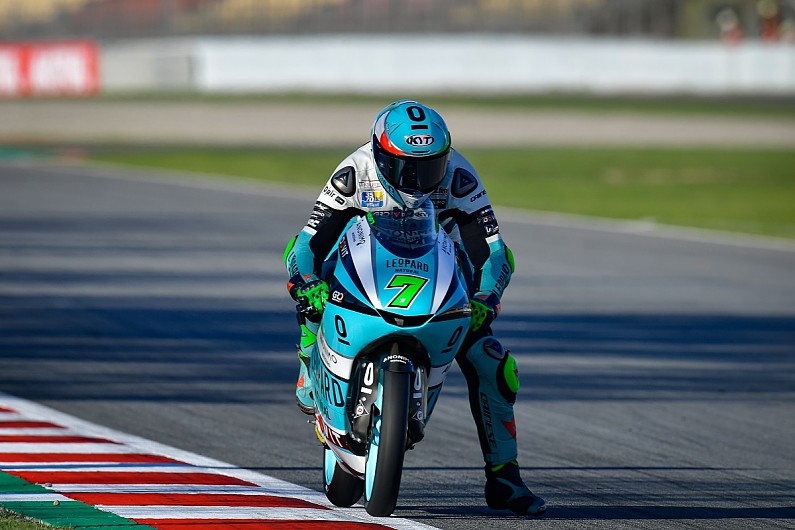 San Marino winner Foggia proved difficult to overtake and led onto the 21st and final lap ahead of Binder, Arbolino, Max Racing's Alonso Lopez and the EG 0,0 Honda of Sergio Garcia in the breakaway lead group.

Binder nailed his run through the first four corners and muscled his way up the inside of Foggia into the Turn 5 left-hander, forcing the Leopard rider wide and allowing Arbolino to come through into second.

Arbolino was unable to find a way past Binder on the run to the end of the lap, with the CIP rider getting to the chequered flag 0.103 seconds clear.

Binder joins his KTM MotoGP-mounted brother and 2016 Moto3 champion Brad as the only South African to have won in the lightweight class since its switch to the Moto3 formula in 2012.

Foggia held onto third to complete the podium ahead of Garcia and Lopez, while Masia and VR46's Celestino Vietti took the chequered flag in sixth and seventh.

However, both were docked one place for exceeding track limits on the final lap, promoting Max Racing's Romano Fenati to sixth. SIC58's Niccolo Antonelli and Rodrigo completed the top 10.

Ai Ogura crossed the line 11th on his Team Asia Honda and moves into the championship lead, though only by three points over Arenas.

McPhee remains third and 24 points adrift of Ogura, while Arbolino's podium lifts him into contention and joint fourth in the standings with Vietti - the pair just 27 points down.