The paddock was left stunned by the tragic passing of veteran team boss and double 125cc world champion Fausto Gresini in February after he lost his battle with COVID-19.

Ahead of Sunday’s racing, the paddock in Qatar observed a minute of silence in honour of the late Gresini.

VR46 rider Marco Bezzecchi grabbed the holeshot off the line, with Bo Bendsneyder capitalising on a poor launch for Lowes to jump ahead into second at the first corner.

Lowes responded straight away at Turn 6 and began his chase on Bezzecchi, while rookie Raul Fernandez moved ahead of Bendsneyder’s SAG Kalex to occupy a podium place at the start of lap two.

Bezzecchi could do nothing to stop Lowes coming through at Turn 1 on the following tour, with the Marc VDS rider immediately opening up a gap of half a second.

Fernandez soon piled the pressure on Bezzecchi and eased his Ajo KTM Kalex ahead at Turn 1 at the start of lap four. 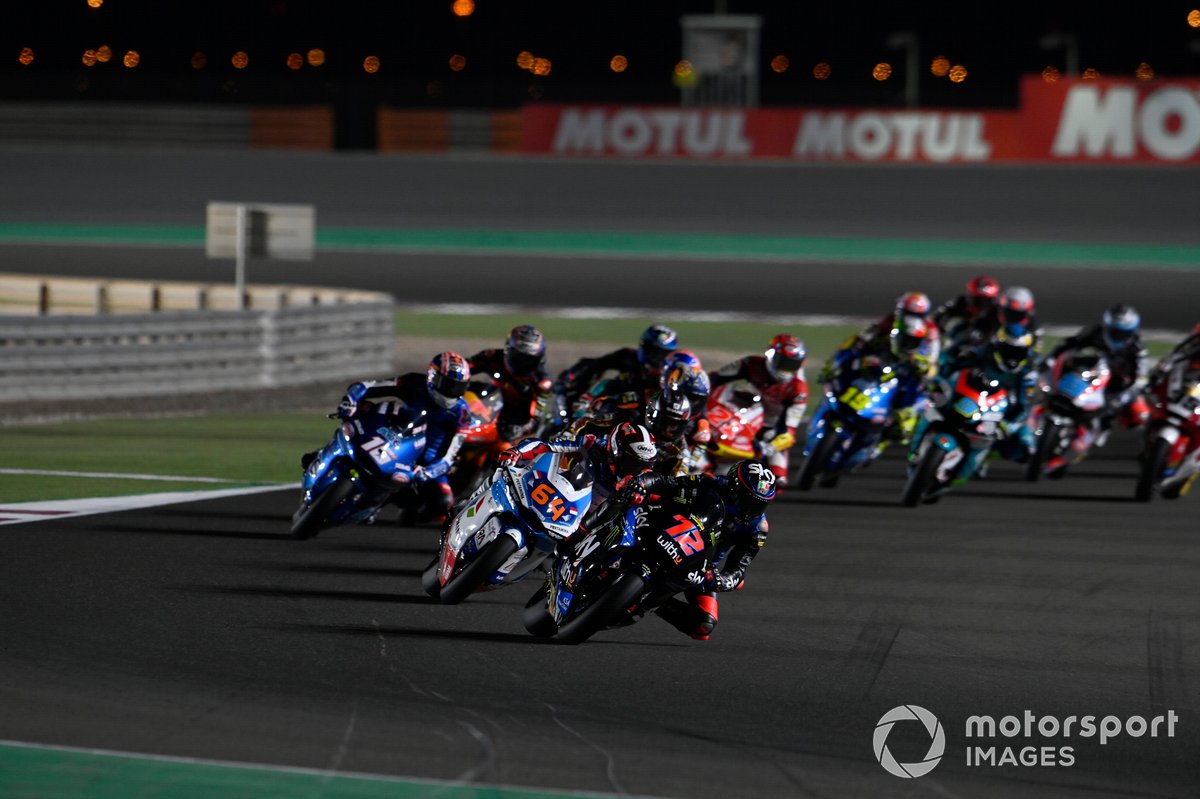 Lowes extended his advantage at the front to a second by the fifth tour, while Gardner recovered from being roughed up at the start to move ahead of Bezzecchi for third on the eighth tour.

A mistake for Lowes on lap six allowed Fernandez to close back in, but it proved a momentary blip and the Briton’s lead once again extended to over a second.

Fernandez would succumb to Ajo team-mate Gardner’s advanced at Turn 6 on lap nine, the Australian starting his chase of race leader Lowes.

But despite strong pace, Gardner could do nothing to bridge the gap to Lowes, the Marc VDS rider easing away to a lead of over two seconds to open the 2021 season with victory.

Bezzecchi came under threat from a late-charge from Di Giannantonio on his first outing for Gresini on the Kalex chassis, and scythed past the VR46 rider at the Turn 10 left-hander on the last lap.

The pair were line astern on the run out of the final corner, with Di Giannantonio holding Bezzecchi at bay by just 0.013 seconds.

Fernandez ended his debut Moto2 outing in fifth ahead of Italtrans’ Joe Roberts, while Jake Dixon (Petronas Sprinta) was seventh on his return from a career-threatening wrist injury.