The Marc VDS rider held his nerve in a tense battle with Binder and Luthi to keep his points gap above the required 24 to add to his 2014 Moto3 world title.

Marquez's championship challenge took a severe knock in the early stages of the season, as a run of fairly average results and three wins from the first four races from Pons's Lorenzo Baldassarri left him 39 points adrift. The nadir came at Jerez, where pitlane start meant Marquez was only 24th at the finish.

But from that point on his fortunes changed and a run of five wins from the next six races meant Marquez held a 33-point advantage over former Marc VDS MotoGP rider Luthi after the Czech GP in August.

Early-season rival Baldassarri suffered two DNFs and never cracked the podium places in that same time, with his challenge all but over by Brno.

Marquez wouldn't win again, but ensured a consistent run of results in subsequent races - save for a crash at Silverstone - kept him out of reach of his rivals.

Coming to the penultimate round at Sepang with 28 points advantage over Luthi and 33 over Binder, Marquez survived early contact with the latter to maintain second throughout.

Several advances on Binder's lead were rebuffed, while Luthi was unable to pressure Marquez into a mistake. 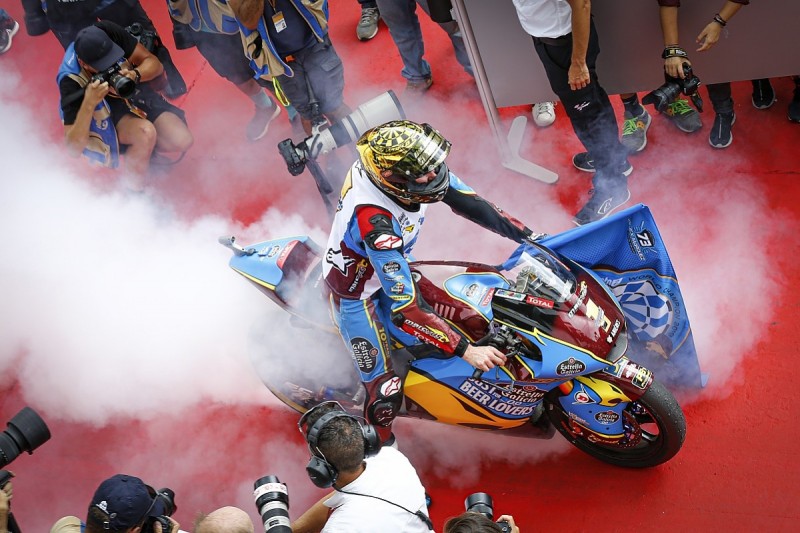 Crossing the line in second, Marquez's advantage of 28 points over Binder proved enough to secure his first Moto2 crown after five years in the class.

This caps off a sensational year for the Marquez family, with older brother Marc dominating the MotoGP class for his sixth premier class world championship in seven years - repeating the siblings' 2014 feat of both winning world titles in the same season.

Despite having finally secured the championship, 23-year-old Marquez will stay in Moto2 for 2020 to defend his title having extended his Marc VDS deal.

He agreed that contract in the summer after alternative options that he hoped would lead directly to 2021 MotoGP seats failed to come to fruition.

He has since been strongly linked to a MotoGP chance with Pramac Ducati for 2021.

He capitalised on a spate of DNFs for title favourite Aron Canet (Max Racing Team) in the flyaways with two wins and a second to win the championship with two races to spare.

Marquez hails younger brother Alex's "once in a lifetime" Moto2 save

Is Alex Marquez more than just a 'brother of...'?