In an exclusive interview, Jenson Button talks to AUTOSPORT about assuming the lead of McLaren's 2013 attack.

While it will be a new break for McLaren - next year will be the first time since 2006 the team starts a season without Lewis Hamilton - Button's three years with the squad should, by his own admission, make for a seamless transition.

But what does Button expect when he assumes the de facto team-leader mantle? Will the outfit miss Hamilton? Will he now have the Saturday edge for the first time, as new arrival Sergio Perez settles in? And what does he think of the young Mexican? AUTOSPORT sits down with the 2009 world champion to find out.

Prost drives for Red Bull: From one exclusive to another. The Professor hadn't driven contemporary F1 machinery for 16 years, but he's not beyond teaching himself new tricks - as he proved when he got behind the wheel of the Red Bull RB6. AUTOSPORT was on hand to chronicle the moment.

India waits for its F1 star: India may have its own grand prix, but leading figures in Indian motor racing believe an explosion of enthusiasm for the sport will only be triggered when one of its drivers lands a seat at a competitive team. We speak to India's biggest exponents of the sport about the progress being made at grass-roots level, and cast our eye over two youngsters making an impression in the junior ranks. 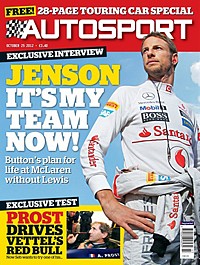 Mark Hughes column: In his weekly column, AUTOSPORT's grand prix editor reflects upon the prevalence of money in the current F1 landscape and how it is threatening to spoil what is otherwise one of the greatest depths of talent of any F1 era.

Zanardi plays down DTM talks: After his Paralympics heroics, 'never' is a dangerous word to use around Zanardi. The Italian has played down talk of a DTM bow, but is pushing for a test in the title-winning BMW M3...

IndyCar to race in Italy: IndyCar is set to broaden its horizons in 2013, with Italy due to host a round of the series. Monza, Imola and Mugello are all understood to be vying for the honour.

David Coulthard column: The 13-time GP winner knows a fair amount about the dynamics of an F1 team and being promoted to team leader - and is convinced that Hamilton's departure will help cement Button's world-class status.

VW wants Latvala early: Jari-Matti Latvala is a man in demand. Although currently under contract with Ford - which prevents him from driving anything but the Fiesta until the year's end - VW is negotiating to get him into a Polo R WRC as soon as this year's championship finishes next month.

Analysis - WRC in crisis: Mini and Ford have withdrawn their factory support in recent weeks and the Red Bull series-promoter deal is not yet signed off. David Evans plays devil's advocate and maps out the future for rallying's top level.

Formula Renault 3.5 Barcelona: Of course, the BTCC crown wasn't the only title settled last weekend. In his debut season Robin Frijns beat Jules Bianchi to the FR3.5 crown, but only after a controversial clash in the second race that put the Frenchman out, as Glenn Freeman reports.

WRC Italy: A rare mistake for Sebastien Loeb allowed Citroen team-mate Mikko Hirvonen to take his first win for the French team. David Evans reports from the island of Sardinia.

DTM Hockenheim: Another season finale, another title battle that went down to the wire. Mercedes driver Gary Paffett held the lead going into Hockenheim, but, as Jamie O'Leary reports, it was Bruno Spengler who triumphed, rounding off an incredible return season for BMW.

WTCC Suzuka: Alain Menu's Chevrolet and Stefano D'Aste's BMW shared the spoils in Japan, but factory Chevy title fighters Yvan Muller and Rob Huff remain tied on points as the series heads to the penultimate round in China.

V8 Supercars Surfers Paradise: The annual, two-driver event on the Gold Coast threw up a few surprises, with plenty of European racers keen to show their Antipodean rivals a trick or two. In the end, Jamie Whincup and Sebastien Bourdais took the opening salvo for Holden, with Ford pair Will Davison and Mika Salo winning the second. Our own Aussie correspondent Phil Branagan has the story.

From the archive: Remembering the late Greg Moore's final CART Champ Car victory - at Miami in 1999.

Race of my life: Swedish racer Jan 'Flash' Nilsson recalls the weekend he cleaned up on the streets of Monaco in the European Renault Spider Cup in 1996.