Nico Hulkenberg's imminent move to Sauber for 2013 may well be on an interim basis, with the German's performances set to be closely monitored by the Maranello outfit next season.

We also outline Hulkenberg's potential replacements at Force India, as well the candidates for the second Sauber seat.

Kamui Kobayashi: In the wake of his contact with Jenson Button in last weekend's Korean Grand Prix, Kamui Kobayashi believes the tag of being "aggressive" is unfair. We speak to the Sauber driver and compare his season with his McLaren-bound team-mate Sergio Perez.

Korean Grand Prix report: Sebastian Vettel led a dominant one-two finish for Red Bull, putting the German at the top of the standings. We have a comprehensive analysis of the Korean weekend - from Astroturf problems for Lewis Hamilton, to another fine drive for Felipe Massa - plus all the latest technical developments, which underpinned the weekend.

Monisha Kaltenborn: a boost for women in F1? Monisha Kaltenborn's appointment as team principal of Sauber makes her the first woman to achieve such a position in F1. We speak to her about the importance of this achievement and her previous involvement in motorsport.

Mark Hughes Column: In his weekly column, AUTOSPORT's grand prix editor reflects on Romain Grosjean's subdued race in Korea and analyses whether or not the Frenchman is mentally strong enough to survive in F1. 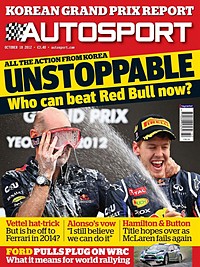 Coulthard retires: David Coulthard will hang up his helmet at the end of the season, as business and family interests take precedence in the Scot's life.

M-Sport hopes to 'do a Brawn': We speak to M-Sport, which believes that Ford has made a bad choice by withdrawing its factory WRC programme and that the Blue Oval may live to regret its decision.

World of Sport: All the action from the NASCAR Sprint Cup, Blancpain Endurance Series and Intercontinental Rally Challenge.

British F3 season review: Jack Harvey took a well-deserved title for Carlin, but was pushed all the way by consistent Malaysian Jazeman Jaafar. Marcus Simmons reviews the year and picks his top 10 drivers.

From the Archive: Gary Paffett, who is set to contest the DTM title decider this weekend at Hockenheim, will draw inspiration from his achievements this time in 2002, when he clinched the German Formula 3 Championship at the same track.

Race of my life: 1996 CART champion Jimmy Vasser recalls the '98 finale at Fontana, a race he won but upset team boss Chip Ganassi along the way.