Professor Sid Watkins died last week at the age of 84 having spent much of the past 34 years deeply involved in making Formula 1 safer. He also offered medical advice and care for team mechanics and anyone else associated with the sport.

In this week's AUTOSPORT magazine we hear from Dr James Palmer about the life and work of the man affectionately dubbed 'Prof' outside F1, and we examine some of the important moments in his career - including the drivers whose lives he saved and the safety improvements he insisted on.

Grosjean: no need to calm down? Mika Hakkinen was the last driver to serve a race ban after being involved in three first-corner accidents in eight races. Hakkinen went on to score podium finishes in his next four events without having any trouble from the stewards.

The two-time world champion explains why he thinks Romain Grosjean needs to keep on being aggressive. Edd Straw then tells Grosjean's side of the story in an exclusive interview with the controversial Frenchman.

This week in F1: The second young-driver test took place at Magny-Cours last week with Jules Bianchi topping the time sheets for Ferrari. Mercedes tried out a new exhaust and there were more alternator woes at Barcelona as Pirelli's 2010 Renault hit the track for more tyre testing.

Singapore Grand Prix preview: All the statistics and analysis you'll need to set yourself up for the fifth Singapore GP. Gary Anderson's supergrid analysis and television and radio times also feature. 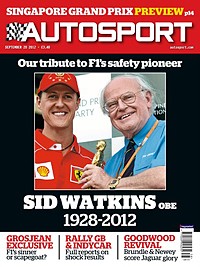 WRC Rally GB: Jari-Matti Latvala takes his first win for Ford since Sweden seven months ago. However, second place for Sebastian Loeb takes him one step closer to a ninth consecutive title. David Evans reports on all the action, including what happened when a 616bhp road-going Bentley took to a stage.

Goodwood Revival: Marcus Pye brings all the fun and frolics from the 15th Revival meeting. The blue-riband event included a daily Silver Arrows demo, a tribute to Dan Gurney and £300million worth of Ferrari 250 GTOs.

IndyCar Fontana: For the third time Will Power failed to close out an IndyCar title, with Ryan Hunter-Reay taking the honours. Mark Glendenning reports from the final round in California.

World Endurance Championship Interlagos: Gary Watkins reports on Toyota's victory in Brazil, its first international sportscar win for two decades. And, he reckons, they did it on pure pace.

DTM Oschersleben: The title battle is hotting up after Bruno Spengler won again for BMW to close on points leader Gary Paffett. Could the Munich marque win the title in its first season back?

Sports Extra: All the news from the Spa six-hours as Klaus Ludwig and Jurgen Barth strengthen the line-up. A new tin-top series is revealed for 2013 and Britcar launches a new GT series.

From the Archive: As part of the celebrations of Professor Sid Watkins's life, the story of his trackside life-saving procedure on Mika Hakkinen in 1995 is retold.

Race of my life: Bruno Giacomelli recalls the United States Grand Prix at Watkins Glen in 1980 and the win that went awry.