The gloom of a British summer could not prevent a riveting grand prix at Silverstone, which provided a gripping win for Mark Webber over Fernando Alonso.

In AUTOSPORT magazine this week all elements of the British Grand Prix weekend are dissected, from Mark Hughes's comprehensive analysis of the race itself, to the fallout from the deluge that caused anger among spectators who could not get into the venue on the practice and qualifying days.

Full coverage of entertaining support races, from GP2 and GP3 (courtesy of Simon Arron) to the Porsche Supercup (Adam Cooper) and Historic F1 (Charles Bradley), completes the Silverstone package, along with the other top stories including Jackie Stewart's reaction to Webber remaining at Red Bull and the consequences of Maria de Villota's horrific accident in the Marussia at Duxford.

Not only that, but as well as scribbling his Historic F1 report, editor Bradley went behind the scenes with Sky to bring you the story on how a GP broadcast comes to your TV screen. And, in his weekly column, Hughes tries to get to the bottom of what's going wrong for Jenson Button.

IndyCar - It was a lot more warmer and generally more pleasant in Toronto than it was at Silverstone, which is just as well as our US correspondent Mark Glendenning is actually an Aussie who gets very upset when it's not barbecue weather. He saw Ryan Hunter-Reay win a gripper. 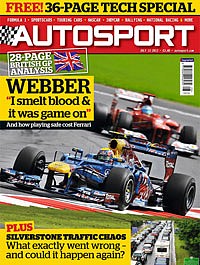 World GT1 - Our bespectacled sportscar guru Gary Watkins went to the Algarve to see the latest installment, which resulted in a one-two for the Mercedes-Benz SLS AMG GT3s of the All-Inkl team.

We cover all the rest of the top international motorsport around the world and nationally in World of Sport and Sports Extra respectively. Read about all the happenings in NASCAR and the American Le Mans Series (among others), as well as great wins for junior Brits Jack Hawksworth, Josh Hill and Dan Wells in various far-flung corners of the globe.

Technology Special - Our free 36-page special takes a look at the technology behind the world's most sophisticated driving machines.

Race of my life - Jarno Trulli had a very long Formula 1 career, but which race was his favourite? The Italian reveals all...

From the archive - Looking back at the 2001 Toronto CART Indycar race, and a seventh win in the event for Ryan Hunter-Reay's current boss Michael Andretti.

Career focus - National motorsport doyen Marcus Pye sits down with Tony Dron to talk about a career that covered everything from Dolly Sprints to dolly birds (apologies for use of 1970s cliché, but there is a Penthouse Pet context...).