Not content to have won 10 of the past 12 Le Mans 24 Hour enduros with petrol and diesel power - and in both open-top and coupe chassis - Audi came to the 80th edition of the race with revolutionary technology in its arsenal. The hybrid e-tron quattro R18s were equipped with power-boosting energy-recovery systems that had only competed once in the run-up to the toughest race of them all.

In this week's magazine, AUTOSPORT devotes 12 pages of editorial to the race, with Gary Watkins bringing the full story of Audi's early-race fight with fellow hybrid runner Toyota and its TS030 machines. Gary also reports on the fantastic scrap for 'baby prototype' honours in the LMP2 class, in which the Starworks HPD of Ryan Dalziel, Tom Kimber-Smith and Enzo Potolicchio came out on top.

The GTE battles are covered in detail, too, with Sam Tremayne recounting AF Corse's charge back from practice misery - Giancarlo Fisichella crashed the team's Ferrari 458 Italia last Wednesday - to victory in GTE Pro on Sunday afternoon. In the GTE Am class, Larbre's trusty Chevrolet Corvette came out on top in the hands of Patrick Bornhauser, Julien Canal and Pedro Lamy.

Our news team analyses the frightening crash that befell Anthony Davidson in the #8 Toyota. The Briton's car cartwheeled through the air after becoming airborne in a clash with a backmarker's Ferrari. Sportscar team bosses have sounded a word of caution over knee-jerk reactions to the accident in which Davidson broke his back. 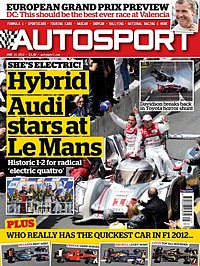 European Grand Prix preview - Is it too much to ask for an eighth different winner in the eighth round of F1 2012? It may just happen - if Felipe Massa, Lotus boys Kimi Raikkonen and Romain Grosjean or Mercedes' Michael Schumacher get their acts together. Full weekend schedule, track facts and tech secrets ahead of the Valencia weekend; Plus David Coulthard gives his usual forthright views on what may happen around the harbourside street track.

F1 2012 - who's got the best car? - McLaren, Red Bull, Ferrari or Mercedes? And what about Lotus, Sauber and Williams? Mark Hughes analyses the top teams' 2012 challengers and points out a few key patterns among the perceived randomness of seven drivers from five teams having won races so far this year.

Goodwood Festival of Speed preview - The 20th edition of the West Sussex motorsport celebration will again feature famous names and cars. Marcus Pye previews the action and picks out some of the star attractions.

IndyCar Milwaukee - Ryan Hunter-Reay came out on top at the Milwaukee Mile for Andretti Autosport. Mark Glendenning watched the American climb up the drivers' points table as a result.

Sports Extra - Just over a year after breaking his back in a massive SPEED crash at Spa, Joey Foster made a return to the cockpit in a Formula Ford 1600 at Thruxton. And he won, too; Plus all the usual club-racing news and reports.

From the archive - Remembering versatile Swedish all-rounder Jo Bonnier on the 40th anniversary of his death during the Le Mans 24 Hours in 1972.

Rally of my Life - 'Mr Maximum Attack' Markku Alen looks back on his dramatic win in the 1981 Rally of Portugal for Fiat with David Evans.