What price a Lewis Hamilton signature on your 2013 contract?

Following the McLaren driver's dominant victory in the Canadian GP - his third in six years - the subject of where he drives next year and beyond is still big news.

As well as carrying comprehensive coverage of the Montreal weekend, with qualifying and race reports, technical analysis and results, this week's AUTOSPORT magazine devotes its lead news item to Hamilton's contract situation. Will he stay for a seventh season with the Woking squad or has his management team been knocking on rival teams' doors?

We examine whether he would 'fit' at Ferrari, Red Bull or Mercedes - the only three teams, other than McLaren, to which the 2008 world champion would surely consider committing. Further analysis does reveal, however, that doors are closing all around him.

It's a fascinating scenario and one in which Lewis may have little control over the coming months. At present, he insists he's just focusing on securing a second world title in this thus-far thrilling season in which he has just become the seventh winner from the first seven races. 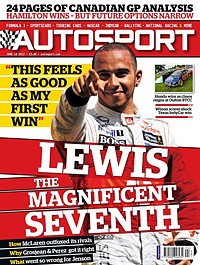 Mark Hughes column - With the 2013 driver market now so volatile, our grand prix editor asks whether world champion Sebastian Vettel has signed a 'deal of intent' with Ferrari for 2014. It may all hinge, rationalises Hughes, on the 2014 engine rules and whether or not they happen...

BTCC Oulton Park - What you needed in Cheshire last weekend for the fourth round of Britain's most popular race series was a Honda Civic. And a Team Dynamics-run one at that. Reigning champion Matt Neal won twice, while his team-mate Gordon Shedden took a win to move into the championship lead. Kevin Turner watched all the action.

IndyCar Texas - Series bosses did a great job to eliminate the flat-out pack racing that had plagued the 1.5-mile oval and at the end of a great race Briton Justin Wilson took advantage of a late blunder by Graham Rahal to secure his first oval win for Dale Coyne Racing. Mark Glendenning reports.

British F3 Rockingham - Marcus Simmons saw Malaysian Jazeman Jaafar take the points lead after a victory and two other strong finishes. Briton Jack Harvey was back on form, too, to win the third race and move right back into contention.

World GT1 Slovakia Ring - The Vita4One BMW Z4 of Michael Bartels and Yelmer Buurman finally notched its first win in a championship race after a balance of performance edict from the FIA put paid to the Hexis McLaren squad's chances of repeating its Navarra success. Gary Watkins explains what happened.

From the archive - Derek Bell recalls his third victory at Le Mans - in the works Rothmans Porsche 956 alongside Jacky Ickx back in 1982.

Race of my Life - Austrian Karl Wendlinger relives the 1992 Canadian GP weekend in which he dragged the unfancied and underfunded March CG911 to fourth place.