In this week's AUTOSPORT magazine Andy Hallbery, helped by former F3 team boss Alan Docking and Dutch legend Jan Lammers, remembers a man who showed a clean pair of heels to the likes of Barrichello, Coulthard, de Ferran, Brack, Lamy and Sospiri in junior single-seaters and could have gone all the way to the top.

Malaysian GP report - Not since September 1955 had a factory Mercedes chassis won a world championship grand prix. That 57-year hiatus ended on Sunday when Nico Rosberg steered his W03 to a commanding, lights-to-flag win. The German, son of 1982 world champion Keke, was imperious in Shanghai and became the 103rd driver to win at motorsport's top level after 111 attempts.

The full story of Mercedes' historic victory is explained in this issue, with qualifying and race analysis, technical appraisal and full results, points tables and lap charts.

In addition, the news team explains how the crucial tyre-temperature operating window will be vital in the fight for the 2012 title. Mercedes hit the 'sweet spot' in Shanghai, with both its tyre warm-up and degradation rate, meaning rivals will be keeping a keen eye on how the Brackley squad measures up once the circus comes back to Europe.

IndyCar Long Beach - Team Penske's domination of the 2012 IndyCar series continued on the streets of California with Will Power taking his second straight win to make it three on the bounce for 'The Captain'. Mark Glendenning reports. 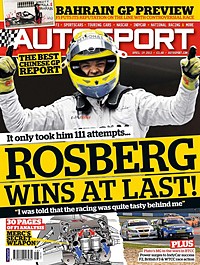 WTCC Marrakech - Those RML-run Chevrolet Cruzes just can't stop winning. Peter Mills travelled to Morocco to watch their most dominant performance to date, with Alain Menu and Yvan Muller each heading a 1-2-3 in the two races.

BTCC Donington Park - More panel-bashing, post-race bickering and plenty of penalties and disqualifications. Yes, the second round of the BTCC played out at Donington and, once it had all calmed down Gordon Shedden left Leicestershire with two wins and a second to kick-start his season. Kevin Turner tries to make sense of it all.

British F3 Monza - In torrential rain Carlos Sainz Jr broke his series duck for Carlin in the first race and won again in the third. Marcus Simmons witnessed the world rally legend's lad shoot to the top of the points.

F2 Silverstone - Luciano Bacheta made the perfect start to his 2012 F2 campaign with a double victory on home soil at Silverstone. Charles Bradley watched him do it.

Sports Extra - With British single-seater racing in crisis, governing body the MSA has called on a number of key figures to help sort the problem.

From the archive - With controversy surrounding this weekend's Bahrain Grand Prix, we revisit the South African GP of 1985 - a race many didn't want to go ahead.