AUTOSPORT's experts were trackside in Melbourne for the first grand prix of 2012 to bring all the news, views and reaction from the 17th world championship race around the Albert Park circuit.

Mark Hughes paints a vivid picture of how Jenson Button capitalised on a great start to leapfrog his polesitting McLaren team-mate Lewis Hamilton and assume a lead he would keep to the end, as well as analysing all the key battles further down the field.

Technical consultant Gary Anderson - now also BBC F1's eyes and ears in the pitlane - reveals some of the subtle technical changes made to the cars. Full car-by-car lapcharts, practice/qualifying times, team-mate comparisons and full race results complement the story of the race.

For further insight from Melbourne, check out the news pages, in which we reveal McLaren's fuel blunder that prevented an even more dominant performance, as well as analysis of Romain Grosjean's remarkable comeback qualifying effort.

Mark Hughes column - Our grand prix editor explains how McLaren had the edge over Red Bull during the weekend, and how the reversal of fortune over 2011 may just give Sebastian Vettel the impetus he needs to get the Milton Keynes squad back to the front. 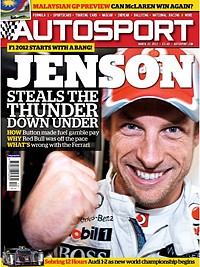 Malaysian GP preview - The sweltering sweepers of Sepang host the second GP of the year this weekend, so check out our full event preview, including TV/radio times, tyre choices and graphical review of the competitive order after round one.

Sebring 12 Hours - The 60th anniversary running of the Florida enduro marked the start of the all-new World Endurance Championship - the first sportscar 'world championship' since 1992. How fitting, then, that the dominant force of long-distance racing over the past dozen years took a one-two finish. Gary Watkins watched Audi's diesel R18 TDIs clean up.

GP2 season preview - Ahead of GP2's eighth season as the F1 feeder series, Glenn Freeman asks if it's still entitled to that status and reveals names and events to look out for during the year.

IndyCar season preview - Rubens Barrichello makes his debut in the US single-seater series this weekend. Mark Glendenning caught up with him ahead of the season opener on the streets of St Petersburg, and also details the drivers likely to lead the way in 2012.

Sports Extra - Our national motorsport team reports on the shocking news that Formula Renault UK will be cancelled in 2012 thanks to a lack of interest. It also picks out some of the club series to watch out for this season.

From the archive - Brazilian Carlos Pace, who lost his life in a light-aircraft crash 35 years ago this week, dragged his Surtees onto the podium at the Osterreichring at the 1973 Austrian GP. We recall how he did it.

Race of my life - German racer Volker Weidler looks back on being part of the trio that took Mazda to its only Le Mans 24 Hours success, with the rotary-engined 787B screamer in 1991.