The announcement of Kimi Raikkonen's return to Formula 1 with Lotus late last year was major news.

After testing a 2010 Renault at Valencia last week, he told Edd Straw that coming back to grand prix racing after two years of rallying was "an easy choice," and that his interest had been reignited by his outings in NASCAR in 2011.

F1's 2012 rules explained - The Formula 1 regulations have undergone a few subtle tweaks for 2012, so AUTOSPORT has assembled its panel of experts to explain the changes and the impact they will have on the important bit: the racing.

Charles Pic interview - Charles Pic will be the third Frenchman on the F1 grid this year. The 21-year-old rookie tells Glenn Freeman that he'll need to earn the right to stay with Marussia beyond 2012.

Toyota aims to beat Audi - After an absence of more than a decade Toyota is back in international sportscar racing with a petrol-electric hybrid. Team technical chief Pascal Vasselon speaks to Gary Watkins about the firm's plans to beat Audi in the big one: the Le Mans 24 Hours. 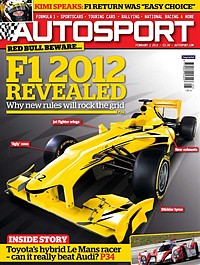 Sebastien Ogier interview - Ousted from the factory Citroen WRC team last season, Sebastien Ogier jumped at the chance to join Volkswagen's new effort. But that requires a season in a Super 2000-spec Skoda ahead of a 2013 WRC return. And he made quite an impression in Monte Carlo recently, as David Evans explains.

Daytona 24 Hours report - All the action from Florida, where Michael Shank Racing's Riley, crewed by AJ Allmendinger, Oswaldo Negri, John Pew and Justin Wilson, took a narrow victory - its first in the classic US enduro. Jonathan Ingram was there.

Felipe Nasr interview - British Formula 3 champion Felipe Nasr won his ride with Michael Shank's prototype squad for the Daytona 24 Hours and the Brazilian impressed on his sportscar debut, helping the car to third overall. Andrew van de Burgt caught up with him.

Triple 8 back in the BTCC with MG - Our British Touring Car correspondent Kevin Turner talks to Triple 8 top man Ian Harrison about his squad's return to the series with MG and former employee - and champion - Jason Plato.

From the archive - Jason Plato will hook up with Triple 8 and MG for the 2012 BTCC. We recall his 2001 title success with Ian Harrison's squad in the Vauxhall Astra.

Rally of my life - Frenchman Jean-Pierre Nicolas tells David Evans how a last-minute deal to compete in the 1978 Monte Carlo Rally in a hired Porsche 911 led to an historic victory that became the rally of his life.