The 2008 world champion faces a dilemma. Should the McLaren ace sever his ties with the team that brought him to F1 in 2007 having guided him through junior single-seaters or stay with the British squad in the hope more world titles will follow?

The 26-year-old is desperate to win more championships - it's his raison d'etre - and he's becoming frustrated that the past three Woking-built machines have failed to given him the platform he needs.

On the back of Lewis's cack-handed approach to Red Bull in the Canadian GP, and the public airing of his frustrations at McLaren, AUTOSPORT grand prix editor Mark Hughes analyses the choices the Briton is likely to make in the coming months.

Mark Hughes column - Exhaust-blown diffusers will be outlawed in 2012 but, as our columnist explains, it doesn't mean that Red Bull - the team that pioneered the technology - is going to suffer.

Book extract - The double 2010 world title-winning Red Bull RB6 has had the Haynes Manual treatment and we bring exclusive extract from the cut-away classic.

What's up at Lotus? - Targets of mid-field scraps and regular points hauls were set by the British outfit but they haven't been forthcoming in 2011. Edd Straw reckons it's time for a reappraisal. 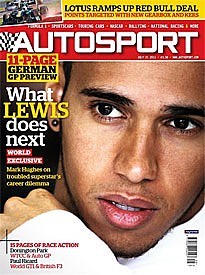 Luca Filippi - On the eve of his 100th GP2 series start, Italian veteran Luca Filippi tells Glenn Freeman that he's happy with his lot and that he knows he's missed the F1 boat.

British F3 Paul Ricard - Another two wins for Brazilian Felipe Nasr have given the Carlin youngster a massive championship lead, while Will Buller broke his series duck for Fortec. Ben Anderson reports.

World GT1 Paul Ricard - German duo Michael Krumm and Lucas Luhr managed their tyres better than rivals in France to notch up a brace of wins in the JR Motorsports Nissan GT-R, witnessed by Gary Watkins.

From the archive - Paul Warwick kicked off his tragic British F3000 campaign with victory in the opener at Oulton Park, just four months before he lost his life in round five at the Cheshire venue.

Race of my life - Dane Kris Nissen remembers a frantic European FF2000 race at Zandvoort in 1981 and tells Jamie O'Leary that it was the race of his life.