Graham Rahal took his first IndyCar pole position since 2009 in Detroit, as Helio Castroneves had pole taken away in the final moments of qualifying

Castroneves was on course to take his third pole position of the IndyCar season but had his fastest lap deleted due to ignoring a yellow flag during the session.

Castroneves, who was in the second of two groups, had provisionally set a new track record of 1m13.8901s with his last lap of the 12-minute section of the session before the lap deletion.

Rahal was fastest in the first group, setting a time of 1m13.9651s. He also set the pace in Friday morning practice and is looking to take his first win of 2017 this weekend.

Rahal still lines up alongside Castroneves, who was still fastest of his group despite his lap deleted, as his strongest weekend of the year continues. 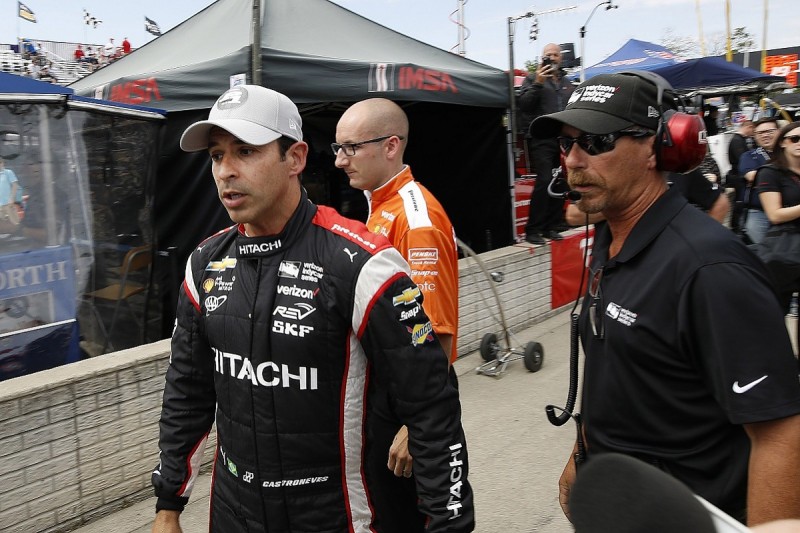 The Detroit double-header weekend has a unique two-group qualifying format due to the large amount of track activity across the weekend.

Each group's pacesetter gets a championship point and the fastest time across the two sessions is given pole position.

Indianapolis 500 winner Takuma Sato will start third, after he finished second in the first group.

The stewards decided not to penalise Sato following an incident where reigning champion Simon Pagenaud accused him of driving erratically.

Alexander Rossi will start fourth, despite brushing the wall lightly on his fastest lap.

James Hinchcliffe and Scott Dixon will line up on the third row, with Dixon nursing a slight ankle injury following his monstrous accident at the Indianapolis 500 last Sunday.

Mikhail Aleshin had his fastest lap deleted for the same infraction as Castroneves, and dropped down to 20th having been fourth in his group.

Esteban Gutierrez made his IndyCar qualifying debut and will start on the penultimate row, having been faster than Dale Coyne Racing team-mate Ed Jones.